Beauty in the smallest details

The Bay of Fundy is a land of giants – from the massive tidal changes that expose the ocean floor to the sun every 12 hours to the wondrous sweeping vistas that capture the imagination.

And it’s hard not to concentrate on these mammoths when you’re surrounded by so much majesty.

Indeed, I find that even hiking the trails of Fundy National Park I tend to focus on the big picture around me.

The giant evergreens that stretch toward the sky.

The colorful panorama that appears each time I hike within sight of the Bay.

The brilliant large wildflowers that seem to sprout from every roadside.

The tumbling rivers that sprout from the hillsides.

The vast stretch of rocky shore exposed at low tide.

While these grand displays certainly beg our notice, it’s often the smaller – perhaps more subtle – things that escape perception.  And that’s a shame because sometimes it’s the smallest of things that are the most worthy of examination.

In particular, I find that when I compel myself to pay special attention to what surrounds my feet I’m often amazed at the rich variety and patterns that appear.

Suddenly I’ll take note of the tiny ghost-white Indian pipes that are poking through the leaf litter.  Colorless due to the chlorophyll, the delicate plant would be easy to miss by the casual hiker. 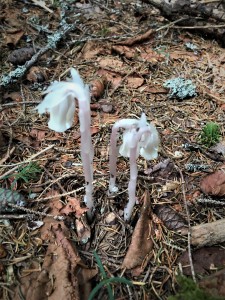 Further down the trail, a small yellow mushroom pops out of the tangled pine branches on the forest floor.  And on a weathered boardwalk, a brilliantly blue dragonfly pauses for a rest.

Hiding in the weeds at the shore of a boggy pond is a bright green frog while nearby a pitcher plant, one of the park’s carnivorous plants, blooms red-veined and green amid the weeds. 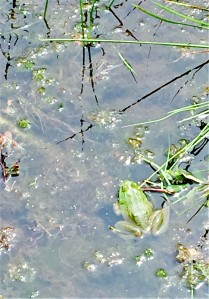 Near a stream, the moss sprouts like tiny palm trees reaching toward the sun.  More mushrooms display colorful caps and ferns struggle to gain a foothold on the rocky soil.

Just as productive is a walk on the beach.

Here, miniscule barnacles cover the rocks, looking for all the world like tiny flowers with overlapping white petals. 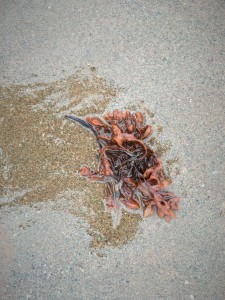 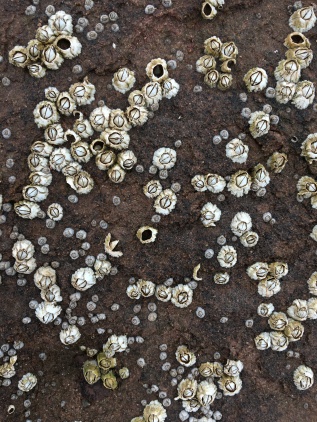 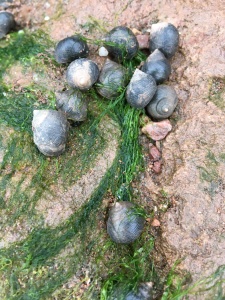 Bladderwort, a type of seaweed with buoyant air-filled floats, lie strewn across the beach.  Small snails are nestled into the green silken seaweed that covers rocks.

Al these miraculous small treasures are ones that often escape our notice, drowned in the majesty of their neighbors.

So, let’s not forget to take notice of all the wonderment around us, regardless of size.

But most especially, pay attention to the smaller, less demanding, sights around you.

Because here lies much of the magic of the world.