The plight of street children

The tiny girl with inky tousled hair who is clad in a dirt-smudged red dress has already seen far too much sorrow and pain in her scant seven years of life.

She’d seen her mother, abandoned by the girl’s father, selling water in the streets of Karachi to make a few rupees.

She’d seen her siblings, including her 3-year-old brother, abused sexually and physically.

She and her five brothers and sisters mostly sleep alone on a dirty mattress tossed to the side of a Karachi street, their bed surrounded by garbage. Yet they dare not leave the safety of the group on dark nights for fear of who they might encounter or what might happen to them.

And on the main thoroughfare that runs directly in front of their mattress home, cars, buses and rickshaws whizz by, the occupants seemingly oblivious to the scene before them.

Seven-year-old Ayesha is one of an estimated 1.5 million children living on the streets of Pakistan’s cities. A visitor can scarcely go a block without seeing several.

For these children life is mostly devoid of hope.

But Ayesha has found a glimmer in an unusual school for street children located under a highway bridge. She is one of 600 street children registered, of whom only a couple hundred show up on any given day.

Her dark eyes stare at her muddy bare feet and she nervously twists a small scrap of paper in her hands as she tries to answer what Footpath School means to her.

“Getting an education will give us a good life,” she explains in a small voice. “It’s like helping ourselves.”

Woman with a mission

In Pakistan, where there is little chance of escape for people at the bottom rungs of life’s ladder, Footpath School provides street children a chance to get an education not available to them elsewhere.

It was begun in 2014 by Syeda Anfas Ali Shah Zaidi, the former owner of a construction company in Pakistan, who decided she must do something to stem the hopelessness of the country’s poorest and youngest residents.

And that something, she decided, was education. 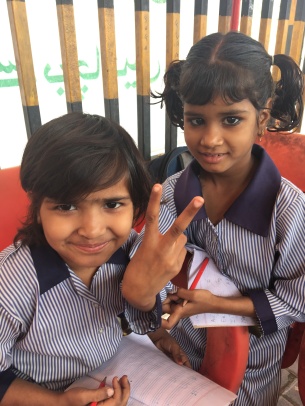 Although Pakistan’s Constitution requires the government to provide free education to all children, that doesn’t always happen. In fact, in Pakistan 22.6 million children between the ages of 5 and 15 do not attend school, according to the United Nations.

And even when they do attend public schools in Sindh Province — where the Footpath Schools are located — the quality of their education is deplorable, according to 2017 educational rankings. Among those children who go to school, only 17 percent of grade-five students from the poorest segments of society can read a sentence.

So the Footpath Schools were begun to minister to this segment of the population.

Today, there are four Footpath Schools that offer free education to street children in Sindh Province, the southern, most-populous region of Pakistan that also includes its largest city, Karachi.

The largest of the Footpath Schools is run on a patch of concrete Zaidi and her colleagues have commandeered beneath a bridge on the busy streets of Karachi. They’ve erected large iron fences to protect the children from the cars careening by on all sides.

The schools, run on a shoestring budget through the Ocean Welfare Organization, of which Zaidi is president, accept only the poorest of the poor.

They may be children without parents, without identification. They may be abusing drugs. They have often been sexually and physically abused.

They are often children who have been traumatized by what they’ve seen and experienced.

It’s a group that would have great difficulty functioning in a regular classroom.

Footpath School seeks to accommodate and adjust to those differences.

So, for instance, most of the classrooms are open-air, which encourages the street children to attend.

“They need to be able to come to a place that is visible, that they can see into,” says Tahir Masood, the vice president of the Ocean Welfare Organization.

In addition, the organization provides all its students with shoes, uniforms, food and basic health care. It also gives the children 50 rupees a day — the equivalent of about 43 cents in the U.S. — so they don’t have to beg on the streets or work to support their families.

Children are taught karate, for example, so they can protect themselves while alone on the streets.

Zaidi draws one small child close to her. “She’s already experiencing abuse on the streets,” she says. “The streets are not safe.” 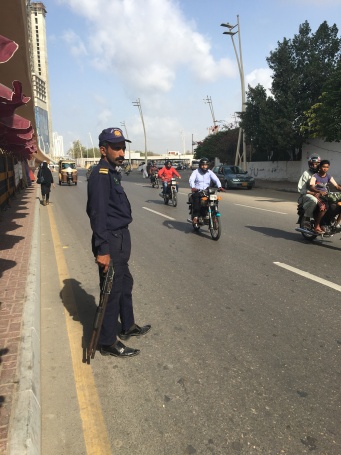 There’s the security guards who stand in the openings, guns ready, to protect the students and teachers from anyone who might wish the school harm.

In fact during the same month this Footpath School opened, six Taliban-affiliated gunmen attacked the Army Public School in the northwestern Pakistani city of Peshawar. When the violence was over, 132 schoolchildren between the ages of 8 and 18 had been killed.

Zaidi, Masood and the others connected with the schools would like one day to provide their children with certificates to signal how far they’ve progressed. They would even like to somehow wrap in shelter so sleeping on the streets wouldn’t be necessary.

But for now, they know they’re making a difference.

A survey by the UN’s Office on Drugs and Crime, notes that 72 percent of these children have no contact with their families. A full 1 in 10 children has no idea who their parents are.

A 2009 report from the United Nations Convention on the Rights of the Child severely reprimanded Pakistan for doing too little to protect these children from harm. 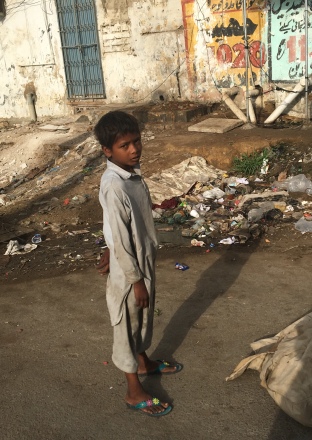 According to the Society for the Protection of the Rights of the Child, a Pakistani nonprofit, street children are more likely to be drawn into abuse situations, cast as children laborers or thrown into sexual trafficking. Many are involved in using and selling drugs at an early age.

The children are vulnerable and unprotected — a fact that often makes them prime targets.

A case in point — in 1999 a man by the name of Javed Iqbal was convicted of murdering 100 street children in the city of Lahore.

There’s also health risks. There are few health services for the children.

As the staff of Footpath Schools worries, there’s the chance these children, without hope or future prospects, could be drawn into the nets of terrorists.

Despite the success Footpath School has achieved with the street children it serves, dangerous obstacles lie ahead.

The Sindh government has recently filed complaints against the school and wants to roll its street children into government-run schools. Officials have said Footpath School isn’t providing them with an adequate education.

That’s hard to believe from a provincial government that’s recently been cited for the deplorable education taught in its public schools. It’s so bad, in fact, that the Sindh Province has recently been outsourcing education to private groups.

Funneling these children into a regular classroom is something Zaidi says would effectively end the children’s education.

“I don’t want to restrain these kids to classrooms surrounded by serenity and calmness,” Zaidi told Samaa TV. “Street children will not take to such an atmosphere. Hence we have established a school here, surrounded by the hustle and bustle of traffic that … keeps them returning to school the very next day.”

The Express Tribune, a widely respected news organization in Karachi, suggests that the government’s move may have more to do with the government’s attempt to squelch positive international media coverage on the school, stories that have given the provincial government a black eye.

Zaidi and her staff believe that Footpath Schools — and their method of providing an education to street children — can help diminish the violence and terrorism being seen across the world.

“If we can to finish violence and terrorism in the world, we must begin with the children,” says Syeda Naalofarali, one of Zaidi’s advisors.

“We should not hand them a weapon, we should hand them an education.”

Selfie at the school! 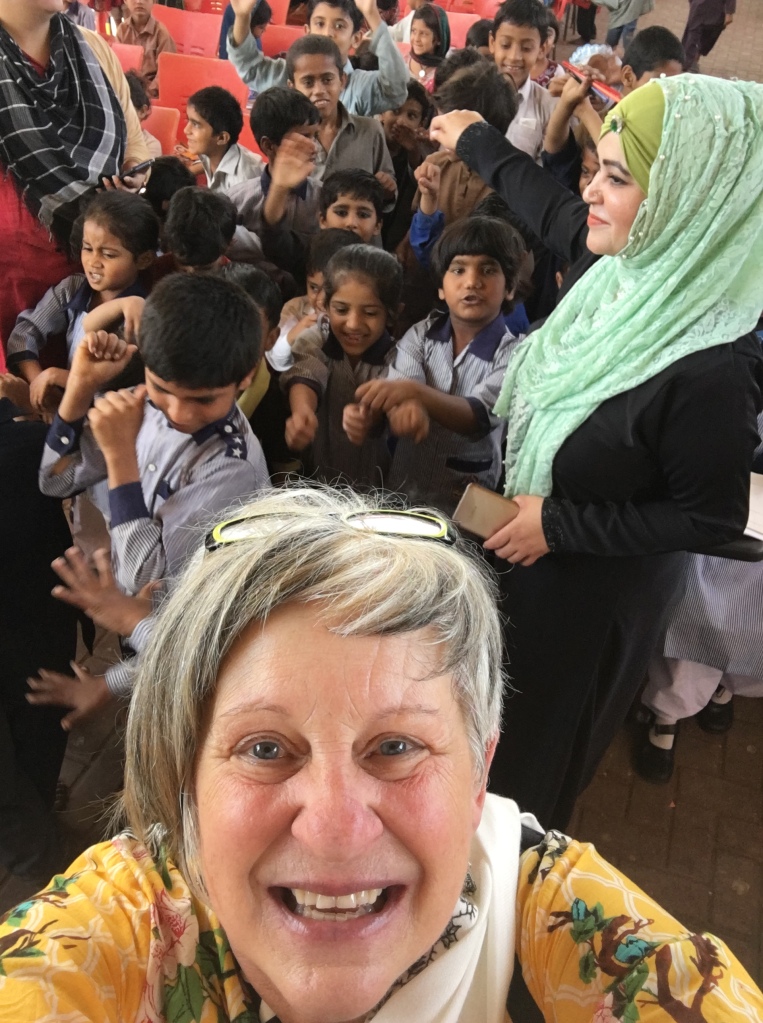