The Ruins of the Day

In fact, it began a little after midnight when, awakened by the familiar jangling of my cell phone, I glanced at the image displayed on the front and realized it was my son, Bridger, who was calling.

My heart sank.  Something had gone wrong and, of course, my mother’s mind naturally raced to the worst.  He and Alex, who were traveling together to the airport in Atlanta, were the victims of some sort of accident.  It could have been via car as they sped along the interstate to catch their flight.  Or, perhaps some sort of airplane accident was looming.

With shaking hands, I answered.

Hello, Mom.  We missed our flight.

I’m sure Bridger expected some sort of recrimination but all I felt at that particular moment was a vast sense of relief. I didn’t even question what had happened.  All I knew was that Son No. 2 and Son No. 3 were both fine.  My heart, which has fallen into the pit of my stomach, rose back to its appropriate place in my chest.

Luckily I had used a travel agent to book the tickets and she was the one who had to deal with re-ticketing the boys’ missed flights.  Still, it was midnight and I was wide awake.  I was irked and irritated they had somehow missed their initial flight out of Atlanta.  I was dismayed that they would probably have to take a large chunk of their Greek spending money to book a new itinerary.

I lay there a long time thinking about my vacation-gone-wrong until I finally sunk back into a light sleep. 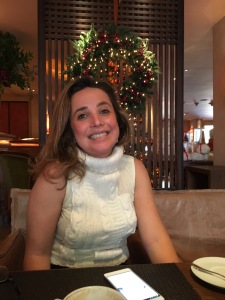 The next morning I awoke bright and early to catch a bus toward the airport where I would meet my rental agent, Marie, and together we would pick up the boys.  I located the kiosk that sold the needed bus ticket, purchased one and hopped the A-2 bus toward downtown.  After a handful of stops, I asked a fellow passenger, who was able to speak broken English, if I was going the right way.

No, she replied.  You should be on the A-2 going in the opposite direction.  It took me a good 30 minutes to get off the wrong bus, locate a pedestrian tunnel to cross the busy street and catch the appropriate A-2.

And the sun was barely up.

This was going to be a long day.

Tyler, who unlike the others had encountered no difficulties in route, arrived on time and the three of us – myself, Tyler and Marie – wove our way out of the airport toward the southern coastal highway.  We had planned to take the whole crew to the southernmost tip of the country to spend the reminder of the day, but we had been whittled to a trio.  Undeterred, we headed south.

The road slithered like a concrete snake hugging the rocky coast.  Although the weather was brisk, the sun was brilliant and the water of the Mediterranean Sea to our right shone crystal sapphire.  Ruddy beaches spread from the inky black rocks piled at the high tide line down to the water.  In the distance, mounds of rocky islands lay scattered across the horizon.

While dozens of people were out this Sunday to enjoy a respite from the normal chill of winter, most were busy walking the beach, sipping wine or simply enjoying the air.  A few hardy souls splashed their way through the icy water clad only in swimming suits.  The cold water is good for your health, Marie explained, but I couldn’t imagine braving such cold without a wetsuit.

To our left, bronzed mountains rose, their sides rumpled as if some Grecian god had lazily tossed his blanket in a heap.  Here and there, squat dusty green plants and grasses sprouted.  An occasional olive tree seemed to struggle for survival in such a dry environment. 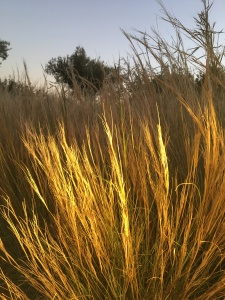 White-washed homes with blue shutters climbed up the mountains, wall to wall with a jumble of many-storied apartment buildings and small shops.  All were various shades of white that would be stained red with the setting or rising sun.

We stopped to eat a sea-worthy lunch at a Mediterranean-side café and sampled many small dishes – mezze – of Mediterranean delicacies.  We selected from pink cheesy spreads spotted with great chunks of feta, glistening red roasted peppers stuffed with a well-spiced ricotta, marinated octopus, fishes cooked whole and sliced, steaming, down the middle, prawns the size of a golf ball.

The day was indeed, going better than I might have anticipated. 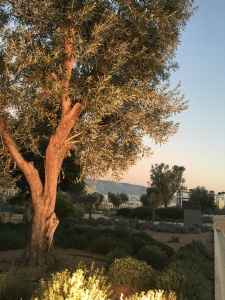 But then, the phone rang.

Mom, the voice on the other line began.  We’re in Paris and our flight has been cancelled.  We’ve booked another but it won’t be in until near midnight.

Since Tyler was fading fast after a sleepless oceanic flight and I had not recovered from the midnight wake-up, Marie magnanimously offered to pick Bridger and Alex up at the airport.  Before that, however, she would drop Tyler and I off at the apartment where we could snuggle under our piles of down comforters and drift off to sleep.

But there was one more stop we were determined to make.

Fifteen minutes down the coast at its southern tip, lay a promontory by the name of Cape Sounion.  And on that craggy spit of land, surrounded on three sides by the sea, was perched what remains of the ancient Temple of Poseidon, god of the sea.

It was dark by the time we reached the spot and rounded a turn in the road to catch our first glimpse of the ruins.  It was enough to take our breath away.

There, upon a hill of indigo black and beneath a starred sky, 15 dazzling white columns were illuminated by foreground lights. The temple had been built in 444 BC as a stunning tribute to the god who, in Greek mythology, ranked second only to Zeus.  Although the temple had been over time reduced from its rows of 34 pillars, it was still sublime in its majesty.

I was as awed by the sight as the ancient Greeks must have been when making pilgrimages here to pay tribute to the mighty Poseidon. The emotions I felt staring upward at the shimmering ruin left me nearly in tears. 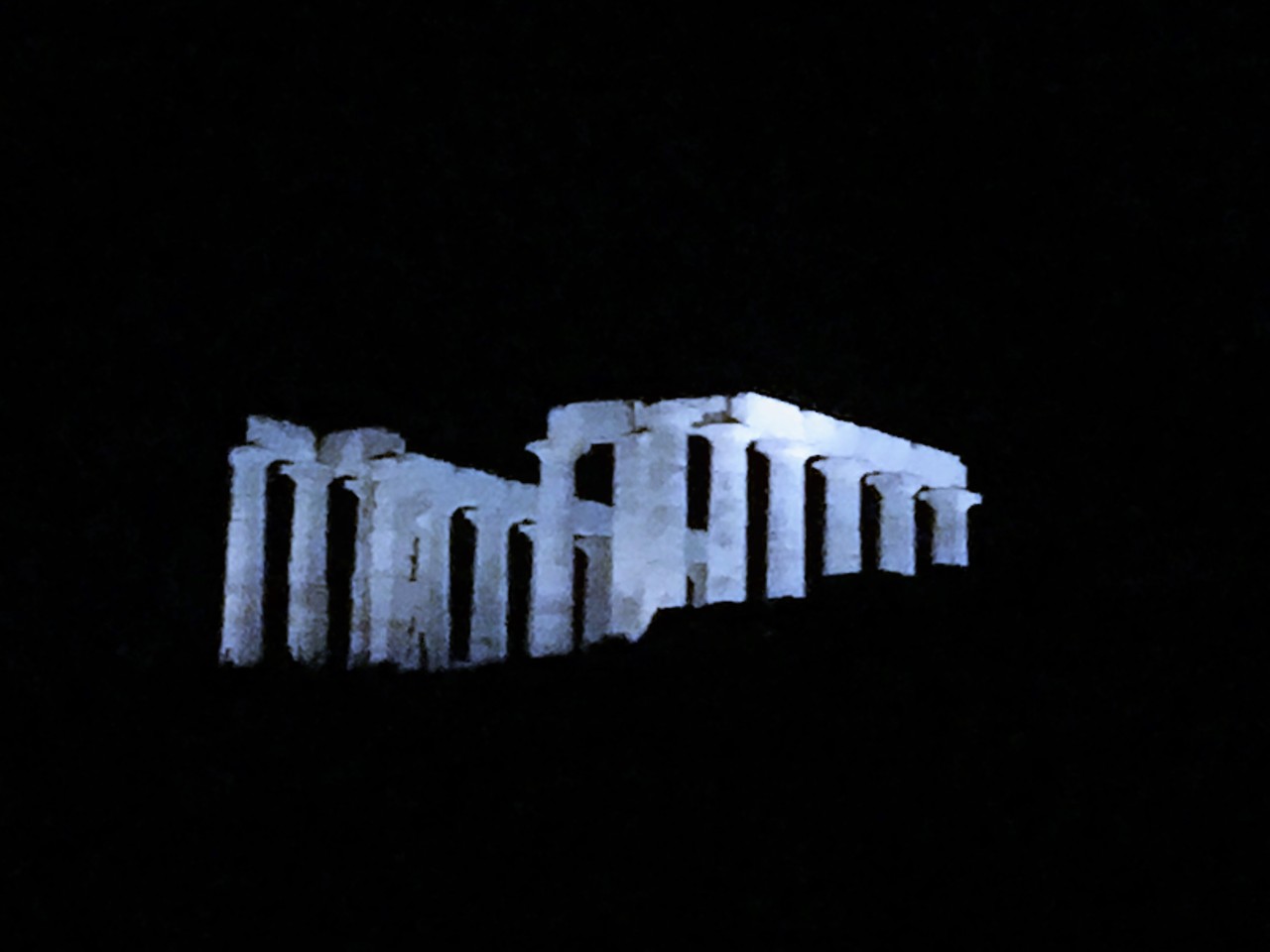 The hour-long road trip back to our apartment was cloaked in silence, each of us alone in our private reveries. Marie dropped us off and Tyler fell almost immediately to sleep.  I escaped to my laptop to share the story of the day.

As I sit here and think of the recent hours I’m struck by the variableness that a day can bring.  What began as a trying and uncertain morning was transformed by nighttime into an experience that was itself transformative. How easy it would have been to allow the difficulty of the morning obscure the beauty of the evening.

I find that happens too much in my everyday life.  The stress that occurs within a work-a-day life has the ability to drown out the happy, but some time quieter, moments.  Momentary angers and disappointments last too long and prevent us from savoring what’s really important.

What is a missed flight (or even two) after all?  Took the wrong bus?  So what?  Spent a little more than you expected?  Oh well, it’s not the end of the world.

Our days are really too brief to let clouds darken a shining sun.

I know I’ll probably be asleep by the time Marie drags the boys up to the apartment tonight.  But tomorrow I’m going to jump out of bed with excitement to have them here, no matter when and how.

It will be a wonderful day!

NOTE:  Our duo became a quartet when Bridger and Alex arrived around 1 a.m.  I’m one happy mum!