The mammoth steel slabs dangling like bodies from rafters in an Alabama memorial offer chilling insights into the brutal legacy of slavery that led to over 4,000 murders of blacks in the South and elsewhere across this country.

The National Memorial for Peace and Justice, which opened April 2018 in Montgomery, is the first U.S. commemoration of the thousands of men, women and children who were killed primarily because of the color of their skin.

At the time, the murders were calculated to produce the utmost terror within black communities as a form of control by the majority white population.

Many of the victims – who died by lynching, beating, stabbing, drowning, burning, shooting — were falsely accused of crimes or even killed simply because the white mob could not locate the person it was seeking.  Some were tortured for hours before they died.

The memorial  serves as witness to the victims of such wrenching hate.

Eight hundred rusting blocks identified by county bear the names of the black victims who are documented to have died there between 1877 and 1950. Some of the slabs contain dozens of names while others contain only a single name.

Their “crimes” were often insignificant or false.

There was, for instance, Benjamin Hart who had been falsely accused of peeping into the window of a white girl in Duval County in 1923.  His body was found riddled with bullets.  An unnamed black construction worker was lynched at nearby Camp Blanding in 1941 after accusing a white co-worker of not returning his shovel.

Only miles from Jacksonville, 21-year-old Otis Price was shot by a white mob and left to die on the side of a road near Perry in 1938.  He was a black laborer accused of a non-specified crime by a white woman, a charge that was never investigated following his death despite demands to the governor for a full examination.

Few areas of the country were immune from these terror killings.

The immensity of the memorial, which covers six acres atop a hill in downtown Montgomery, stands testament to the scope of the tragedy.

It leaves its visitors silent and shell-shocked.

Just blocks away is the Legacy Museum where the Equal Justice Initiative, which also constructed the National Memorial for Peace and Justice, has housed exhibits describing the history of slavery and racism in the United States.

It’s built just steps away from what once was the site of one of the nation’s most active slave auctions.

But it isn’t just the memorial and accompanying museum that deliver such a devastating gut punch.  The city is steeped in sites that harken to both the dark days of slavery as well as the Civil Rights era.

These include the site where Civil Rights activist Rosa Parks was arrested, Martin Luther King’s 1950s church and parsonage, the Rosa Parks Library and Museum, the Civil Rights Memorial and Center, the Freedom Rides Museum and the offices of the Equal Justice Initiative itself.

Most are open free to the public although both the Legacy Museum and the National Memorial for Peace and Justice require tickets to enter.  These tickets can be bought online at museumandmemorial.eji.org.

While the various historic sites in Montgomery will always be critical in understanding this country’s complex, often brutal relationship with its black citizens, they’re perhaps even more crucial today as the nation once again struggles with racial divisions.

The current political climate has rightly illuminated the fact that this nation does not exist in a post-racial state, as some observers believed following the election of President Obama.  Instead racism is alive and well and exists to some extent within all of us. 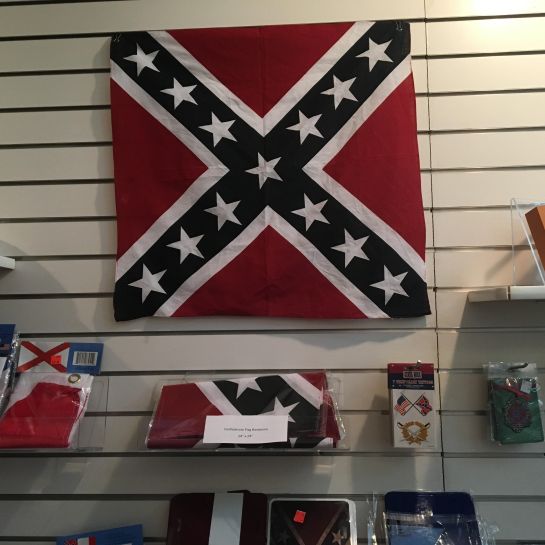 As if to underscore that point, a state park – Confederate Memorial Park – exists within a half-hour’s drive of Montgomery where the Confederate flag proudly flies.

Not a single photograph of a black person is displayed within the park’s museum, not even within an image containing a group of people.  In the park’s gift shop, numerous items displaying the Confederate flag are offered for sale to tourists.

Nearby, and on park grounds, placards outside a “reading room” proclaim that the issue of slavery wasn’t a consideration in the Civil War.  The room and reading material are maintained by the Sons of Confederate Veterans, a group that is not categorized officially as a “hate group” but that has been shown to have ties to other such groups.

It’s crystal clear that it’s time we acknowledge the ugly history of racial relations in this country.

All of us must confront not only our racist history but the racism that still exists in this country.  From slavery through Black Lives Matter, racial inequality has negatively defined both this nation and all of us.

The National Memorial for Peace and Justice and Legacy Museum provide precisely the uncompromising exploration in which we all need to engage.