The amazing allure of train travel

There’s something magical about a train trip.

And I don’t mean those touristy rides on old-fashioned narrow-gage tracks or rides that use antique steam engines and depart from locales such Durango or Dollywood.  These routes are merely circular fantasies that embark from and return to the same point and whose “passengers” are vacationers.

The main purpose here is to experience a recreation of what once was, a time when trains formed the main transportation that bound together this vast country.  Don’t get me wrong, they’re magical too but in a “Disney” sort of way.

No, I mean an authentic railway experience — one on which passengers use the rails to get to and from a specific destination; ordinary people utilizing the train as a means of transportation and not necessarily an avenue for entertainment.

Although certainly enjoyment of train travel is part of the trip.

That’s the secret of travel on the many Amtrak routes that cater to passengers with a yen for experiencing these trains’ unique combination that allows riders the benefit of tremendously relaxed travel while enjoying some of the best scenery this country has to offer.

Indeed, there’s no shortage of specialized Amtrak routes that give passengers spectacular scenery and ease of travel at an affordable cost.

Consider, for example, the Southwest Chef that takes passengers from Chicago to Los Angeles via the picturesque rock-filled countryside surrounding Albuquerque and Flagstaff.  Or the Adirondack line that transports riders through Montreal and Saratoga Springs on the way to New York.

These are trains that invite you to slow your normally hectic pace of life while marveling at the scenery passing by the car’s windows.  The reduced pace also allows passengers to get to know the wide variety of people sharing the adventure with them.

I’d never taken one of these Amtrak trains before so when I had the chance, I jumped at it.  In California for a post-holiday visit with relatives, I had to consider how to return to Portland for a flight home.

My options were to take a $400 flight from a small town in Northern California to Portland, to rent a car for an equally expensive one-way trip to that same city, or to take an approximately $70 train ride that leisurely passed through the stunning snow-capped Cascade Range of mountains.

It didn’t take much thought before I called Amtrak to book a ticket on the Coastal Starlight.

The entire route spans the Western Seaboard from Los Angeles to Seattle.  Although much of the southern part of the route skips along the scenic coast, once the train gets to San Francisco, it veers inland through mountainous snow-covered mountains until it reaches its northernmost terminus.

I opted to pick up the train at Klamath Falls, Oregon, a city of 21,000 people located just over the California border.  It promised to be a nearly continuous seven-hour ride punctuated by only a handful of stops.

By the time the train softly growled into the station, I was well primed to claim my seat.  I had already been sitting at the station for a little over two hours as the Coastal Starlight was late, not an unusual occurrence I heard.  On that day flash floods in Southern California delayed its trip.

I had purchased a “Business Class” seat for only a few more dollars than coach, made even more affordable by the senior fares that Amtrak offers.  It’s a seating designation that allowed – among other things – free Wifi, a voucher for a meal, more comfortable seats and a chance to pick where I’d sit.

However, when I boarded I immediately hustled to the “Great Dome” car, where passengers are seated comfortably at tables.  In this car a see-through ceiling covers half the car’s roof and large windows stretch from knee to shoulder level.

Within the first few minutes I’m rewarded for my decision to take the train.  I first catch sight of a soaring bald eagle riding the air currents above a nearby lake and then, as the lake recedes and scattered ranches proliferate, a golden eagle floats overhead.

In fact the chance to settle back and stare out the abundant windows instead of concentrating on maneuvering a car is rewarded time and time again.

White-barked birch trees become interspersed with pines as the train gains altitude.  Snow blankets the sides of the tracks and tops mountains that loom in the distance.  We pass by rock-layered canyons in which giant white ribbons curl along the canyon floor, signifying the existence of snow-covered frozen streams. 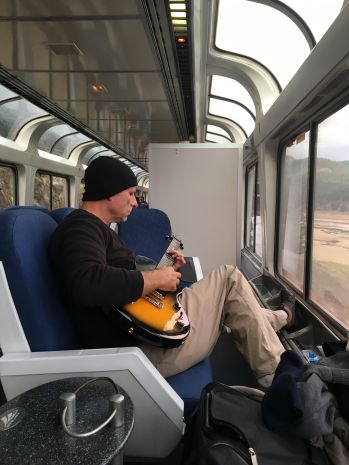 It’s hard for me to take my eyes off the lovely scenery passing by although others, some who may have taken the trip numerous times, are engaged in other pursuits.

Two men work studiously on their computers at a table near me, a couple behind me talk softly about the wedding of a friend, people read, people play games.  In a neighboring car, a man quietly strums a guitar and others sleep.

All the while the train gently sways and the iron rails grind quietly beneath its wheels.  The whistle blows from the engine far in front when we approach crossings.

Soon, a uniformed steward passes through the car to take reservations for lunch and dinner.  Those meals are served in an adjacent dining car and, while certainly not luxurious, the time is special by virtue of the fact that you’re seated with fellow passengers at a table, giving strangers a chance to share their train experiences.

I was seated, for example, with a college student from the Netherlands and a retired couple on their honeymoon whose trip had been booked to include a compartment in a sleeper car.  We had a wonderful time sharing experiences and memories. 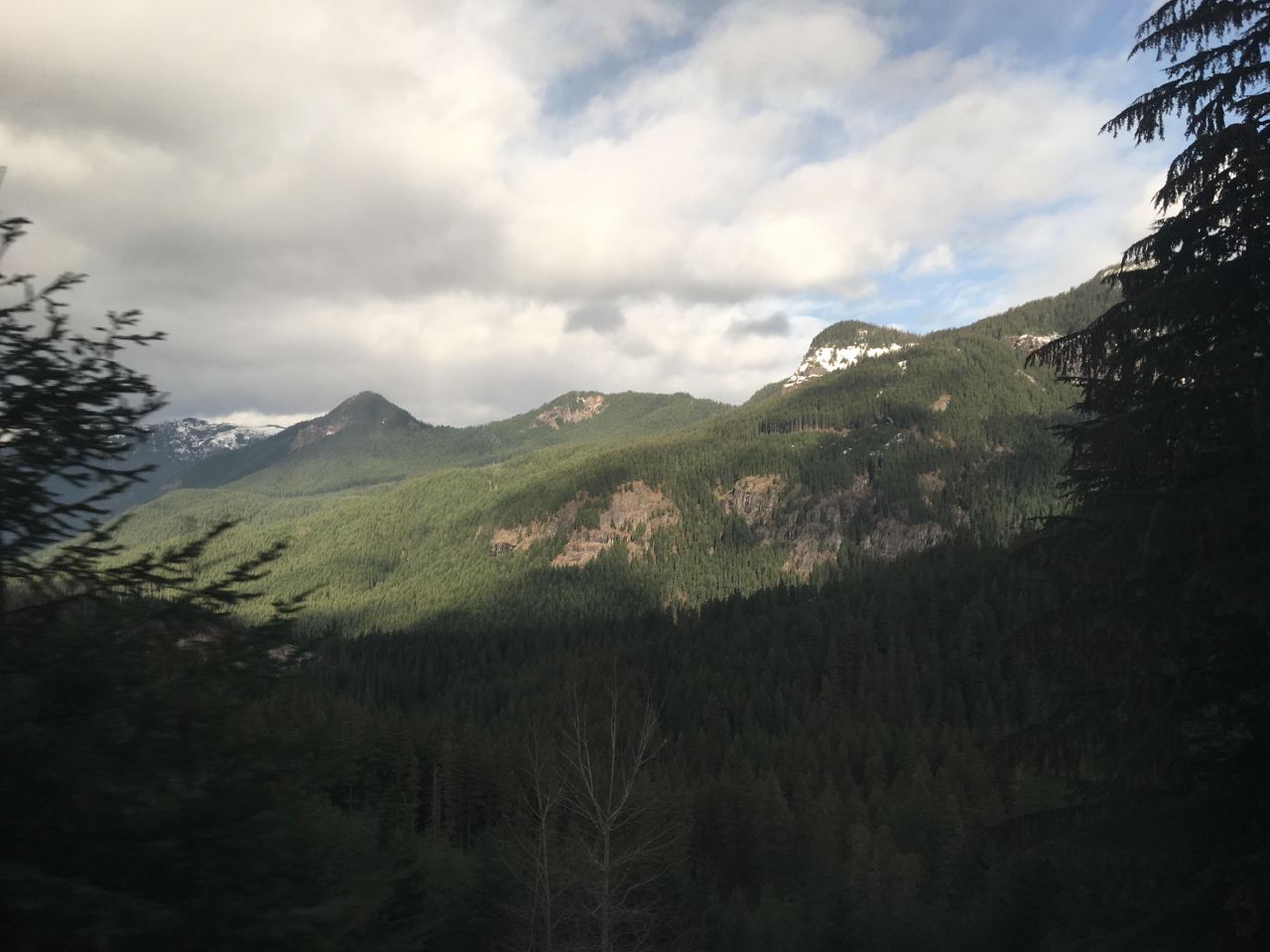 After lunch, the train passed through Eugene and the landscape became flatter, farms more numerous.

I sat quietly in the Business Class car on this last part of the journey, sipping a coffee and gazing at the passing farms, homes and fields.  The large padded leather seats, more than ample leg room and silence in this coach made it a perfect spot to relax to the point of slumber. 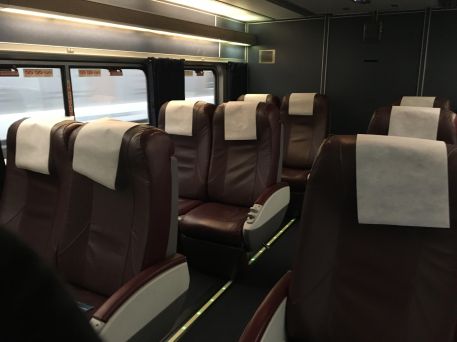 It had been a trip I would recommend to anyone with the need to travel but not on an iron-clad timeline.  As Amtrak trains are susceptible to delays based on weather and other exigencies, it’s best to book these trips with plenty of time to spare at either end.

And even though the steward told us the train would arrive at my destination a bit later than expected because of its initial delay, my mood remained unspoiled.  The rail-induced relaxation continued until I disembarked at Portland in the soft twilight.

As I’m now writing this I’m still basking in the magic of the trip.

Although it was my first such trip, it won’t be my last.