The Gift of a Condor

The white thunderclouds are building over the barren mountains casting dark shadows on the brown silhouetted hillsides of rock as my bus stutters its way along a pock-marked road.

This morning I’ve embarked on what I think of as the third stage of my trip, a mission to catch a glimpse of the largest vulture in South American – the Andean condor.

As I suppose it has many, this bird has fascinated me for years.  Not only have I been drawn by the potential sighting of a bird whose wingspan at nearly 11 feet is only one foot less than that of an ancient pterodactyl, I’ve also been captured by the story of its recent  past.

Like its cousins, the California condors, the Andean condors were once plentiful soaring in the rising air currents above South America’s Andes.  Today, due to habitat loss and human encroachment, the Andean condor is considered “near threatened.”

Colca Canyon, a 44-mile-long deep gash in the mountains that at 10,000 feet deep is one of the deepest gorges in the world, is home to dozens of these winged giants.  It’s the best place in Peru to try to catch a glimpse of an Andean condor.

The terrain I’m traversing toward that point is unlike any I’ve encountered yet in Peru. 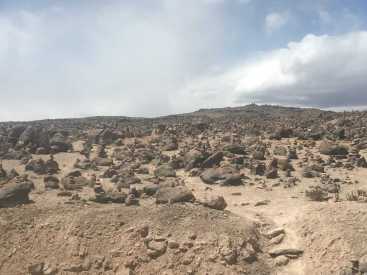 Upon exiting Arequipa, an 800,000-person city in the southernmost part of the country where we’d stayed for several days, the urban landscape transformed into terrain of almost surreal conditions.

To describe the countryside as rock-strewn would not do it justice as stones of all sizes covered the ground seemingly to the feet of the distant mountains, so thick and numerous that the dusty dirt beneath could not even be glimpsed. It was as if an ancient had mulched the ground with stone of such thickness that only the hardiest small shrub or grass could poke its head through.

The spine-jarring,  two-lane road twisted back and forth around the ever-steepening hills as we climbed steadily upward.  Accompanying me was my brother-in-law, Michael Tousey; his wife and my sister, Bobbi, stayed behind in Arequipa as she was recovering from a nasty case of food poisoning.

Soon, the rocky groundcover lessened and a gossamer layer of soil above the rock now supported a few more golden bunches of grass, dusty shrubs and occasional cacti.  The closest hills in this arid landscape were little more than mounds of rock and sand secured from the cold blowing wind by a tenuous mesh of low plants.

Within these high Andean plains, the Peruvian government has established the Pampa Canahuas Vicuna Reserve specifically to protect the wild relatives of the two animals perhaps most associated with the Andes, the domesticated llama (pronounced “yah-mah”) and the alpaca.

The delicate vicuna had been decimated before the 1970s by hunters who sought the creatures for their meat and incredibly soft fur, considered so valuable that within the Incan empire only the Inca himself was allowed to wear it.

Small herds of gold-and-white vicuna can easily be spotted today from the highway, grazing on the parched grasses.  Their numbers have increased from an estimated 6,000 in the 1960s to 75,000 today.

The shy guanacos, larger relatives of vicuna that are in fact the largest wild mammal in South America, are often found at even higher altitudes so seldom seen from the roadways within this reserves.  Their fur is valued second only to that of the vicuna.

Herds of multicolored alpaca and llama can also be occasionally seen, but they seem to keep their distance from their wild ancestors.  These two domesticated species are extensively used for their soft wool, as beasts of burden and, at least in the case of the alpaca, for meat.  Alpaca dishes are served at many restaurants, the meat most closely resembling lean more-strongly-flavored beef.

In the distance now, dark ribbons of rain extend from the clouds to the mountaintops, portending a wet future for this traveler.  The clouds are angrily creeping over the blackened hills toward our bus, swirling dust devils in their advance.

Other than the few species of life that seem able to thrive on this high alpine environment, there seems to be little else that exists on these barren hills.  There are not even any traces of ancient civilizations here, the hills bereft of the layers of terraces universal within Peru, and the only modern-day evidence of human existence the smattering of houses and small adobe tourist shops scattered along the highway.

The bus soon crosses the highest pass on our trip — Patapampa at 4,900 feet — and we begin our descent toward the place the marks the start of Colca Canyon.  In the distance, one of the area’s three active volcanoes can be glimpsed spewing white smoke into the sky.

More abundant life seems to return to the countryside.

Rectangular swaths of green begin to appear at the bottoms of gorges where the area’s now-present human inhabitants raise irrigated fields of maize, quinoa and potatoes.  Pastures delineated with rock fences contain a few head of cattle, sheep, burro or sheep.

Within miles, the remnants of the hillside terraces indicative of the Incan Empire begin to appear.  Many have either been abandoned for decades or are temporarily being rested from crop propagation as it is the custom to do here every two or three years.

The canyon that has begun to appear on our right, deepens and widens.  Although in the beginning, occasionally rudimentary bridges span its mouth, Colca’s rims soon become too distant to join.

We pass through scattered showers, the large drops streaking the windows of the bus.  But these showers are short-lived, after all it’s not yet the start of the rainy season in January when the desert will begin to bloom and farmers cultivate their crops in earnest.

Within two more hours we come to one of the deepest spots on the canyon and here we pause.  As we exit the bus, dark winged shapes pass quickly overhead, too rapidly to ascertain whether they sport the tell-tale white neck ruffs of the Andean condors.  There are, after all, other species of vulture that exist here as well, but none with that white collar.

As a group we advance toward the rim of the canyon, leaning on the wooden rails to gaze beneath.  Far below a white ribbon, the River Colca, flows through the core of the gorge.

Colca’s steep rocky sides then rise up to our feet and on the opposite ring far above to dark mountains that tower above.  The only sounds are a low hush of voices and the whoosh of the canyon-born winds that attract soaring birds here.

Then the gathered crowd, as if in one voice, gasps.  Fingers point and eyes shoot skyward.

A gigantic black bird swoops around a rocky precipice and glides serenely overhead.  It turns slightly in the breeze and the sun glints off a white collar.

It’s the object of our trek here – an Andean condor.

As if one, heads swivel as the bird soars overhead then down beneath us into the canyon.  As it soars beneath us, we can see the white feathers on the backs of its wings, confirming the identification.

It’s soon joined by a juvenile condor, just as large as its adult companion but without the white neck and its breast streaked with brown.

The two play on the air currents for a time, sweeping up and down the canyon.  Each time they re-appear from behind a canyon wall or rise up beneath us, there comes that same collective gasp from onlookers.

Then as suddenly as they appeared, they are gone, perhaps on their way upon the prevailing winds toward the Pacific Ocean where they’ll spend the day before returning to the canyon for the night.

In all, it perhaps lasted 15 minutes – but within that short time, the minutes seemed to barely creep by.  It was a magical encounter in a magic place.

After another hour, we again board the bus to head back to Arequipa.  We had seen no more condors but a group-wide satisfaction seemed to prevail.

For me, it was the chance of a lifetime made even more satisfying because of its timing – only one day after I turned 65.  It was a birthday present that may never be matched.