In many ways, a trip to Peru is tracing the history of the genocide of a culture.

Most visitors come here searching for the remnants of a lost empire of some 11 million people destroyed 450 years ago by a conquering handful of Spaniards greedily in search of gold and slaves.  That empire was shattered within years of the Spaniards’ arrival, although traces within the physical, linguistic and physiological remain.

We arrived in Cusco searching for those remnants and found their traces everywhere – from the intricately constructed ruins left from the ancient civilization to the Quechua language to the Andean people, many of whom are direct descendants of the people known as Incan.

And while there was much to see in terms of that empire, there was also so much to learn.

First, the Incan empire is only the final chapter in a history of American civilizations that had existed for thousands of years before.  Remnants of these cultures as well are scattered across the landscape of Peru but are somewhat ignominiously referred to by a single name – Pre-Incan.

One by one these civilizations were conquered by the Incan Empire, which eventually extended from present-day Columbia to Bolivia to Chile.

But as opposed to the Spaniards, whose main goal was to enslave the Peruvians, the goal of the Incan Empire was to enlarge its holdings.  Compliance by the newly conquered was not ensured by enslavement but by dividing and relocating people to various places around the empire to ensure a peaceful assimilation of cultures.

Along the way, the empire created one of the greatest states in human history.

Yet I was surprised – and dismayed – to realize how very little I knew of these people and cultures that occupied the same land mass on which I grew up – the Americas.

Even the word we use to refer to these people — “Inca” — is a misnomer.

In actuality, Inca refers to a single person – the absolute monarch of the empire.  His people were a conglomeration of various cultures that his people had conquered.  They all spoke a common language, Quechua, but that term shouldn’t be used to describe the people themselves.

Cusco, where we began our journey, was the capital of the ancient Incan Empire.  And it revealed many of the remnants that made this city the empire’s hub.

Chief among those might be the Temple of the Sun, the most important temple in the empire.  The temple, which consisted of smaller temples to other entities such as the moon and stars, was elaborately constructed of large stones cut so perfectly that no mortar was needed.

The walls were once covered with gold sheets and its interior filled with golden and gem-encrusted statutes.  It was “fabulous beyond belief,” according to the Spaniards who originally encountered it.

Tragically, those same Spaniards pulled off the golden sheets and melted them along with the golden statues and other artifacts found there.  Colonialists eventually build a cathedral on the site but did incorporate much of the intricate stonework into the structure.

Other ruins also exist within Cusco, some like the Temple of the Sun serving as the foundations of newer structures.  Sacsayhuaman sits on the outskirts of the main historic district and was an Incan fortress where the empire managed to hold off the Spaniards in 1536 for a short while.

Outside Cusco ruins of both the Incan Empire and other civilization are also open to visitors.  Pikillacta is a 5,000-acre Wari (Huari) site south of Cusco that was once occupied by 70,000 people.  Near there is Tipon, once a luxurious garden for the Inca where his workers practiced sophisticated irrigation techniques.

On through the Sacred Valley are site after site.  In fact, just driving through the valley reveals ancient Incan terraces, easily spotted for their excellent construction, located on nearly every mountainside.

There also are a series of terraces where the empire processed salt (in Maras) and the amazing circular terraces at Moray, where workers performed sophisticated agricultural experimentation to select and even alter the variation of food plants. 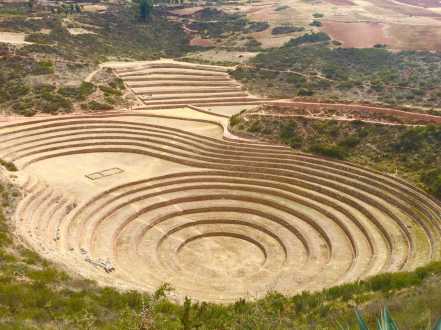 Ruins dot the mountainside along the 45 miles or so from Cusco to Ollyntaytambo, where visitors must hop a train to eventually get to the famed palace of Machu Picchu.  Ollyntaytambo is definitely worth a stay itself as it remains one of the most intact towns of the Incan Empire.

Unfortunately, my trip ended here.  A poor choice in food left me in bed for our scheduled day at Machu Picchu, but what I’d already seen will forever stay in memory.

Certainly the people who built these miraculous structures were master craftsmen meticulously cutting giant stones without the use of metal tools, transporting them uphill without the use of wheels or large animals, and then settling them into walls where the seams are often barely visible.

But they were also skilled agriculturalists, astronomers, philosophers, poets and artists.  They developed an intricate system of record-keeping through the use of knotted strings.  They also invented a calendar.

Yet after they were first encountered by the Spaniards in 1532 led by Francisco Pizarro, who had received permission from the Spanish queen in 1529 to conquer the Incan Empire, within a very few years the empire had all but disappeared.

Amazingly, Pizarro’s forces consisted of only 168 men and 27 horses.  The inhabitants of the Incan Empire numbered in the millions but were unable to defeat an army of armor-clad soldiers using metal weapons.

Of course, the diseases the Spaniards brought with them also took their toll on the susceptible people of the empire.  Typhus, smallpox, influences, diphtheria and the measles all took their toll.

The empire officially fell in 1572 when the last Incan stronghold deep within the Amazon was conquered and the last Inca captured and executed.