If you don’t like it hot, then get out of a Pakistani kitchen.

At least that’s the lesson learned from 10 days in the South Asia country, where the quality of  dinner seems measured by the amount of spicy heat generated by its main courses.

We also learned that food is the foundation of hospitality here.  There was never a meeting in which tea and dishes of small sandwiches and cookies weren’t offered as a matter of course.

Although the cuisine of Pakistan is less known than its close neighbor India, much of the same heat familiar to lovers of Indian food has found its way to Pakistan.  Combine that with the distinct flavors of Far-Eastern and Middle-Eastern dishes and you’ll get an idea of the taste of this distinctive cuisine.

Meats of all kinds – from goat to chicken – form the basis of Pakistani entrees, along with seasonal additions of potatoes, cabbage, peas and chickpeas.  Lentils and rice are essential staples

In fact, Pakistan food has been called “meat heavy,” with entrees focusing on large chunks of meat simmering in spicy fat.  Many are served over rice and eaten with never-ending supplies of chapattis or naan, types of Pakistani bread. 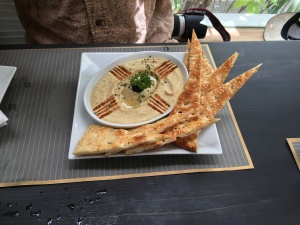 If heat isn’t your cup of tea – and, indeed, tea is the beverage of choice here – there’s always the tasty desserts, snacks and other drinks that make up the Pakistani table.

Lassi is a yogurt-based drink served sweet or “salty” as an accompaniment for any meal.

Chai is not the beverage you’ll find at your local coffee shop, but a twice-boiled sugary tea with milk. 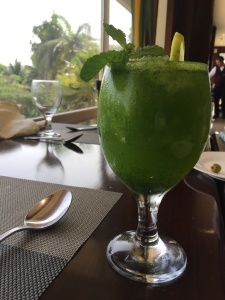 On the dessert end of the meal, there was gajar ka halwa (made from carrots and milk), lab-e-shireen (made from jelly, cream vermicelli, pistachio and pineapple) and kulfi (a distinct type of Pakistani ice cream made with cardamom).

The one that won my heart, however, was the divine kheer, a rice pudding spiced by cardamom and sprinkled with pistachios and almonds.

So, sample some of these Pakistani dishes.  I’ve provided recipes below for two of them.

Springs of mint for garnish

2-3 Tbsp. grated cucumber for each drink

1.        Place the sugar and water in a saucepan and bring to a boil.  When the sugar has melted, add the vinegar and continue to boil 5-7 minutes over medium heat.

2.       Remove the pan from the stove and drop in the bunch of fresh mind.  Cover the pot and let the beverage cool completely.

3.       Once it has cooled, remove the mint and discard.  Pour the syrup into a jar and cool in the refrigerator.

Bring the coconut milk, sugar and regular milk to a boil in a large saucepan.  Add Basamati rice and simmer over low heat until the mixture thickens and the rice is tender, about 20 minutes.  Stir to make sure it doesn’t burn.

Now, stir in the raisins (if desired) and cardamom and cook for a few more minutes.  Ladle into serving bowls and garnish with almonds and pistachios.

Can serve hot or cold.