“The views were immensely wide … everything that you saw made for greatness and freedom, and unequaled nobility … You woke up in the morning and thought – ‘Here is where I ought to be.’” 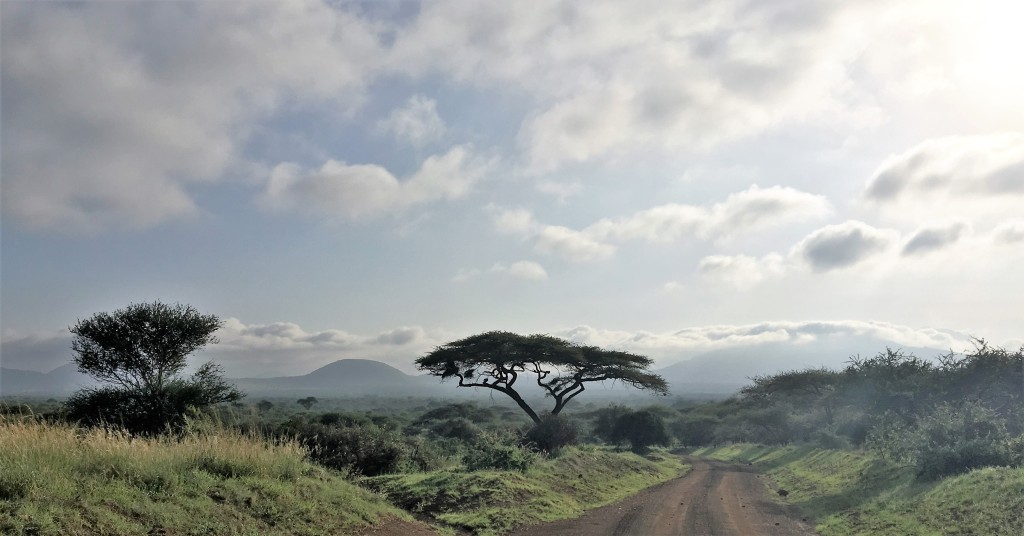 The sounds of the afternoon in the African bush are few — wind rushing, locust chirring and small birds singing as they flit among the thorns of the flat-topped acacia trees.  Beyond that all is silence as many of the bush’s creatures are resting during the midday heat.

I am seated on a wooden deck of a small thatched hut perched on the side of a rocky hill.  Beneath me stretches mile upon mile of grassland dotted occasionally with low bushes and lesser things that hug the ground.  The wind is at my back.

Directly below me a gazelle stands placidly in the shade of a tree and to my right, a bull elephant moves slowly beneath another small stand of trees.  On the rock-strewn path that led to this hill, shy dik-diks, rabbit-sized antelope, ran as they heard our van approach and baboons paused what they were doing to curiously watch us go by on our way to where I am now, Lions’ Bluff Lodge in the low-lying Tanai hills. 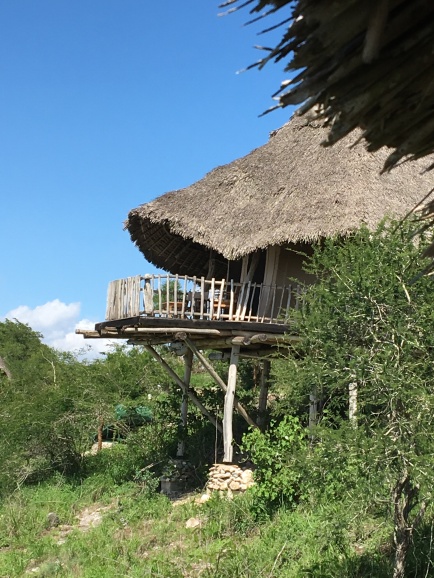 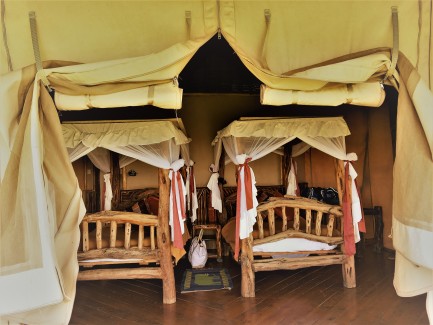 As I sit on the deck in the dusty heat, the green plain stretching out before me is alive with giant shadows cast by the clouds as they race across the sky.  In the very far distance, a line of mountains demarcates the end of this vast expanse and somewhere there, behind the dusty horizon, is the largest of them, Mt. Kilimanjaro.

This is Kenya.  More specifically, this is Luma Community Wildlife Sanctuary, a wildlife park run by the people in this area about six hours south of Nairobi.  We have come here today as the first of a four-day adventure.

I arrived in Kenya just yesterday morning after spending nearly a week with my sons enjoying the history and culture of Greece.  Whereas the Grecian air had been chillingly brisk, the air in the airport at Mombasa was heavy and hot.

Before I could even summon the energy to go through customs, I ducked into the restrooms to strip off the sweater and boots that had kept me warm in Greece, replacing them with a sleeveless dress and sandals.  Even then I was sweating. 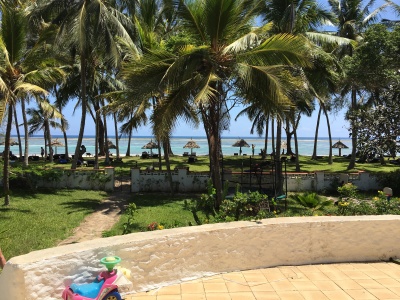 After catching a few blessed hours of sleep, I rose to a shining hot sun and the blue water of the Indian Ocean.  I and two friends, Karen and Nancy, were staying at the Diani Beach Sea Lodge just south of Mombasa, which is managed by Karen’s daughter and her husband.  A beautiful spot, we spent the remainder of my first day here visiting the beach and watching the Syke’s monkeys as they leaped along the compound’s wall.  Later we explored Colobus Conservation, a sanctuary dedicated to preserving all of Kenya’s monkeys but most importantly the strikingly patterned black-and-white Colobus monkeys.

But it had always been our goal to go on safari.  After all, while there are many things that are amazing about this continent, it’s the animals that capture the imagination.

So, on my second day here, we set off.  The road we traveled, which is the main road that leads from Mombasa to Nairobi, is at best a two-lane asphalt path.  At its worst, it is a red clay nightmare, rutted and potholed to make for a jarring ride.  At all times, the two lanes are transformed into three or four lanes with vehicles weaving on and off the graded roadway as cars, trucks and motorcycles vie for driving rights.

Although some of the road borders the national park, there is little to see other than the squat mud, wood and rough brick buildings that make up so much of rural Kenya.  Unemployment is high and poverty grinding. 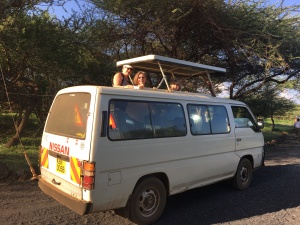 Our actual safari didn’t officially begin, I guess, until the last hour or so, once we entered Luma.  The first part of the drive to here was simply that needed to reach this area of grasslands and bush in southeast Kenya. Our safari, a word that means “expedition” in Swahili and is used as both a noun and a verb, began when we entered the game reserve.

A safari is essentially a very long road trip during which the mission is to stop frequently to view the vast number of species here in Kenya.  Once people have set up camp – or been ensconced in a lodge somewhere on the savannah – the daily safaris are limited to two- to three-hour trips in the early mornings or just before sunset when the animals come out.

Luma sanctuary comprises 125,000 acres and is run by about 2,500 local shareholders.  Residents contributed their land and community members are still allowed to graze their cattle in the sanctuary, but its primary purpose is for wildlife protection. 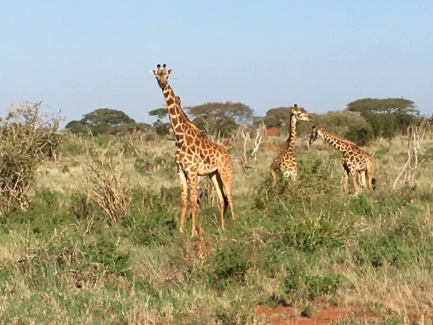 Our thatched huts were perched high on the side of a steep hill, the proverbial Lions’ Bluff.  Each contained two single beds draped with mosquito netting that could be pushed together for more familiarity.  A wooden deck stretched above the savannah below.

We had already seen numerous African species as our jeep ground its way up the nearly impassible incline into the lodge.  Most impressive might have been the red-dusted elephants that were scattered across the plains.  The earth here is a brilliant orange-red and coats the hides of all the animals that deigned to roll in it.

Zebras – instead of the normal black and white – were stained black with stripes of a stunning pinkish-red.  Even the giraffe, whose heads peered out at us from above the trees, were lightly coated a red shade.

Hooved creatures of all kind — gazelle, impala, kudu and more — scattered with the sound of the approaching jeep.  Birds, ranging from the almost iridescent superb starling to the strangely turbaned secretary bird, were omnipresent.

The bush here is almost savannah-like with very few trees rising up above the grasses.  Because of the lower prices to enter (much less expensive than the entry fee of the national parks) and the ready visibility of the wildlife, this park is popular with both Kenyans and visitors.  Unfortunately, that also means a plethora of jeeps and safari vans, a factor that made the sanctuary seem more zoo than wilderness. 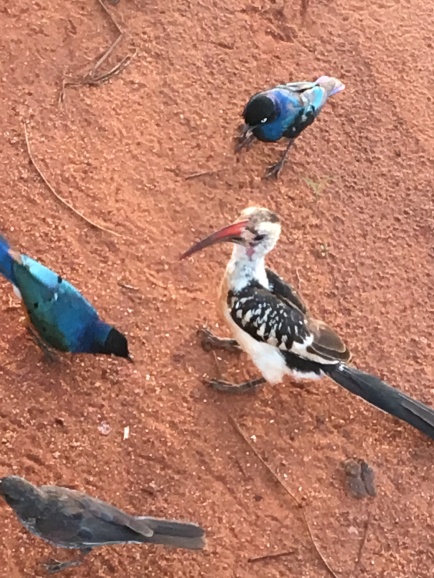 In the very early evening, we again took to the roads to see wildlife.  Along the way, we halted to extend handouts of bread to birds that mobbed our car.  Most were superb starling, which unlike our own mundane black starlings, are brilliant oranges, blues and greens with white feathers encircling their eyes.  Before too long they were joined by a red-billed hornbill that also jockeyed for the bread.

From there it was on to an outcropping known as Lions’ Rock, where reddened boulders seemed cast by giants in a jumble.  While lions are generally elusive, here is where lionesses often go to birth their cubs to protect them from aggressive males.

The static on our driver’s walkie talkie suddenly came alive with a sighting of lions.  Ahead and around a curve, a tawny lioness climbed up the rocks followed by three 2- to 3-month old cubs.  Further down the road, we encountered a shaggy-maned male.

For each sighting, a dozen of more safari vans and jeeps congregated to allow the visitors a chance to see lions.  Although much of me wished for a chance to see such splendid creatures in a completely wild state, I realized how important for animal conservation it is to allow people a chance to see these animals.

Our driver, Michael, said that while Kenyans were generally supportive of wildlife conservation and the country is one of Africa’s best at preserving species, many Kenyans had never even seen the extraordinary creatures that inhabit their country.  Michael has been conducting tours for eight years and admits he wishes even more people could experience a safari to underscore the need for conservation.

Tomorrow we will be traveling to another lodge within Tsavo West National Park itself.

It’s been a great introduction to Africa. 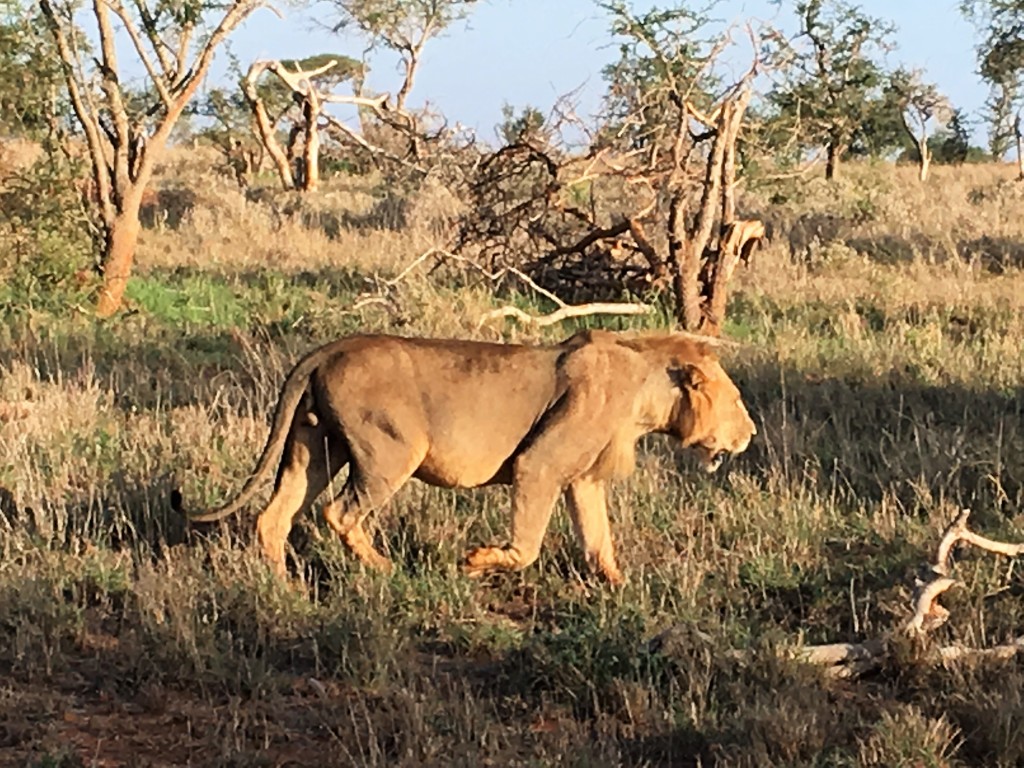