Zorba the Greek, from the 1946 novel of the same name, was a man with an enormous zest for life.  He was an adventurer, a storyteller, a musician, a man who believed people should dance passionately through life, truly enjoying each precious minute.

The novel, and resulting movie, is set on the island of Crete, where Zorba forms a warm fatherly bond with an intellectual young man.  During their year-long relationship, Zorba passes on a lust for life that he believes can be found in the simplest of pleasures.

“I felt once more how simple and frugal a thing is happiness: a glass of wine, a roast chestnut, a wretched little brazier, the sound of the sea,” Zorba tells the book’s protagonist. “Nothing else.”

The book and film have established the standard for island life – and especially the life on Grecian islands – where time passes deliciously slowly and seeking pleasure is life’s mission.  Again from Zorba:

“To have the stars above, the land to your left and the sea to your right and to realize of a sudden that in your heart, life has accomplished its final miracle: it has become a fairy tale.”

Today we set out to follow in the footsteps of Zorba by visiting three small islands off the Peloponnese peninsula, Hydra, Aegina and Poros. The day-long trip was aboard a small cruise ship, a fact that would have usually driven me far away as I detest pre-packaged experiences.  But since I have only two more days in this country I decided this would be the only way to see some of these magnificent islands.

I was pleased, therefore, upon boarding the ship to discover that instead of the 700 people who usually booked this day trip during the summer, we would be sharing the excursion with only 100 people.  It promised to be a much more intimate experience. 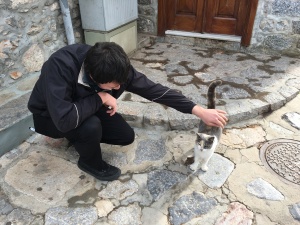 A little over three hours after embarking we caught sight of the first island on our tour, Hydra.  This island – which proved to be the favorite of all four of us – would have pleased Zorba as well.

The picture-perfect small harbor and the white blue-shuttered houses that surrounded it contained most of the 2,000 or so residents.  Only 19 square-miles, Hydra is the only populated island that has banned all vehicles, except for a few emergency vehicles and trash collectors.  It didn’t take much squinting to believe you’d stepped back in time a few centuries.

Mules tied up along the sea could be rented for visitors interested in exploring.  Small shops and traditional cafes lined the harbor front.  And everywhere were cats, well cared for by the locales who realize that these friendly felines delighted visitors.  A pack of dozens met us at the wharf, entwining among our legs, purring for attention.

We happily wandered the tiny winding streets, encountering yet more cats and donkeys, many simply tied outside various stores as their owners shopped inside.  We stopped at a small café for three beers and a glass of wine for myself, the first of many we’d imbibe that day. 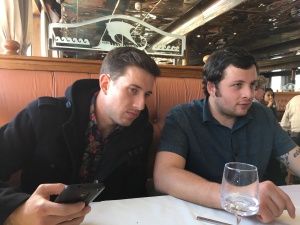 Before re-boarding our ship, we stopped on the dock to watch two residents expertly use hand lines to catch and quickly flip dozens of small fish onto the rocks.  Each would be grabbed by hand and stuffed into a plastic grocery bag to make the two a tasty meal.  One smaller-than-normal fish was tossed on the cobblestone street behind the fishermen where three to four cats were waiting expectantly for just such an occasion. 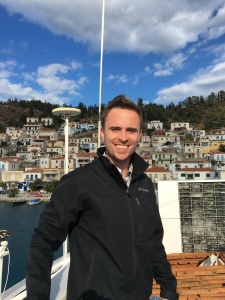 After another one-hour trip, we disembarked upon our second island, the 12-square-mile Poros, which is separated from mainland Greece by only a very narrow sea channel.  After the tranquility of Hydra, it was jarring to find ourselves on an island that included honking cars and motorbikes and a doubling of residents, but the blue water and pastel colors could still entrance a visitor.

The third island, Aegina, was twice as large as the others and home to a prolific pistachio industry.  Once the capital of Greece, the island now has some 14,000 residents and contains ancient ruins, including the Temple of Aphaea, sacred to a mother goddess who was worshipped on this island.

Exhausted after a long day and our faces raw from the brisk wind, we set out on the final sea leg of the trip as the sun sunk below the horizon.  Gathering in the wood-paneled gallery, numerous glasses of wine and beer took off the chill and loosened our limbs (and inhibitions) enough to learn what’s called Zorba’s dance from the musician on hand that night.

The wine and beer continued to flow that night as we consumed plates mounded with moussaka and grilled meats in a small café near our apartment.  When we finally made our way home for the night, we were more than ready to collapse in a contented heap.

In retrospect it’s easy to see how people can so readily succumb to the lure of the Grecian isles.  While in the winter they are wonderful with their colors and relaxed atmosphere, in the summer they must be divine.

The entire experience made me, well, happy.  Zorba would have been pleased for he, too, was captivated by these islands.

“I was happy, I knew that. While experiencing happiness, we have difficulty in being conscious of it. Only when the happiness is past and we look back on it do we suddenly realize – sometimes with astonishment – how happy we had been.”