The sun rises early in this part of Newfoundland.

By 5 a.m. the first rays are beginning to poke over the horizon here on the Avalon Peninsula.  This narrow-waisted slab of land that extends southeast off the main landmass of Newfoundland is home to the provincial capital, St. John’s.  It is also the most easterly point in North America.

That’s precisely why the rising sun shines on this peninsula before any other place in North America each day.  And what it illuminates is an area of striking beauty and a plethora of wild creatures and plants – on the land, under the sea and even in the very air itself.

Whales, fish, mammals and countless birds make this peninsula their home. Newfoundland itself is ground zero for aquatic birds, with over 35 million seabirds either living here permanently or making it part of their migratory routes.

This day did indeed dawn brightly so we decided it would be wise to take advantage of the good weather and head southward toward a town where we could take full advantage of what nature had to offer.    The area around a small fishing village named Witless Bay seemed to be just the spot for whale searching and bird watching.  That’s where we headed.

The road we choose wound south along the Avalon coast through pinelands and farmland.  Tiny fishing villages clung to the coast and numerous islands rose above the wind-whipped seawater.  We finally dipped off the road down into the town of Bay Bulls where we located Gatherall’s whale-watching boats. 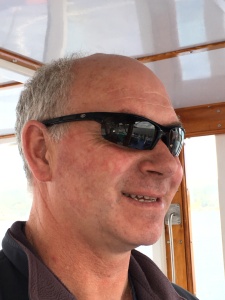 Spotting whales wasn’t guaranteed but seeing birds, including puffins, was assured.  We took the chance and boarded.

As the boat pulled out of the harbor, strains of Newfoundland folk music wafted from the loud speaker.  Like the Celtic music on which it was based, the songs featured heavy doses of love gone awry and encounters with the sea.  Our two young guides even picked up the microphones at times during the trip to sing their own island songs acapella.

At the wheel was the boat’s captain and owner, Al Gatherall, a hearty-looking man in his 60s who had been, as one of the guides told us, Mr. Newfoundland 1973.

We were headed toward several of the islands off shore.  As we neared, the number of birds both floating on the water and whirring overhead grew.  When we found ourselves opposite the soaring cliffs, we could see thousands of birds clinging to the walls.  Gatherall said this one island alone was home to 1.5 million seabirds.

The puffins were easy to spot with their bright orange beaks.  It was the black-and-white murres that were the most numerous by far, covering the water and cliffs, filling the sky.  Over the top of the island soared two bald eagles, which along with the large black-backed gulls, served as the colony’s main predators.

We were headed toward another island when we spotted the puff of vapor – a whale just off our bow.  Gatherall swung the boat to follow slowly.  There were two humpbacks slowly rising and sinking, occasionally with flips of their mammoth tails.

As the behemoths swam and the boat’s passengers pointed and clicked their cameras, soft Newfoundland songs played over the speaker.  The guides even held their patter as the humpbacks danced silently before us.

For two hours we floated on the wind-tossed sea, watching the birds and whales. Gatherall finally launched into his standard guide-talk about humpback life as we continued to stalk the two giants.  He told us that if this encounter had occurred in the 1970s when Newfoundland had just banned whaling, the humpbacks would not have lingered, their fear of boats was so great.

Then just as suddenly as they had appeared they were gone and we were ready to return to the harbor.  One of the guides sang us into the dock.

Back in the car we puttered down the coast a bit more but it was hard to top our sea-bound experience or emerge from the afterglow of the whale encounter.  By late afternoon, we turned around and headed back toward St. John’s.

It had been a magical day, one which we were privileged to share with these giants of the sea.  Yet human’s relationship with these creatures has not always been so platonic.

During the last century, 3 million cetaceans were wiped out, according to one global estimate. And today, despite a 1986 global moratorium on whaling, three countries – Iceland, Norway and Japan – still hunt the creatures.

Someday there may be a world from which whaling has disappeared forever.  Let’s just hope the mighty whale is able to see its end.  They are majestic.