The Land of the Codfish 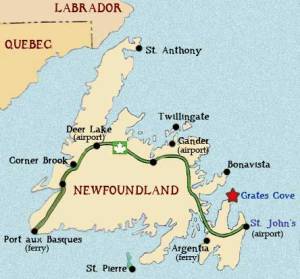 Far below the chattering plane, an island crept slowly into view amid the azure sea.  Churning waves outlined the shore in froth like a thick line of white chalk drawn by a human hand around the land.

It was my first meeting with Newfoundland and as the plane slid down toward the city of St. John’s I pressed my face against the window to get a better look.  Dull greens and soft browns filled the chalk outline and with decreasing altitude, the island began to come into focus.

Small inlets and coves punctuated the coastline and tucked away in each cove were dozens of fishing boats at their moorings.  Within the larger harbors, trawlers and container ships hugged the docks as crews busily unloaded or loaded goods and fish.

How appropriate, I thought, that my introduction to this Texas-sized island would be through its fishing boats.  In so many ways, Newfoundland is tied to that industry.

And, in particular, Newfoundland’s history and culture is inextricably tied to a single fish – the cod.

From its very beginning Newfoundland was an island that based its existence on the plentiful fish in the waters offshore.  Fishing families in remote outports scattered around the island prepared millions of barrels of salt cod each season to supply the world.

It was, in fact, the cod that defined the island.  These gray-green fish were so plentiful at one time that fishermen reported having difficulty rowing their boats as mammoth schools of the fish would block their passage.  In some old writings, Newfoundland is even referred to as “The Land of the Codfish.”

The Grand Banks, shallower waters which lie just southeast of Newfoundland, were especially famed for the abundance of cod and other fish.  It was here that my great-grandfather did much of his cod fishing.

This white-fleshed fish was not only the basis of Newfoundlanders’ existence, it also helped supply the fisheries of much of New England and mainland Canada.

It was the super-trawlers of the mid-1900s that finally spelled doom for the cod industry here.  From a peak catch of 810,000 tons in 1968, the catches kept dwindling and in the early 1990s the industry collapsed completely.

Overfishing, government mismanagement of the industry, greed, ecological ignorance and advanced technology that increased the catches all contributed to the decline.  A moratorium on cod fishing was declared in 1992, devastating Newfoundland’s fishing families.  Many had abandoned their outports for the larger cities or moved completely off-island. 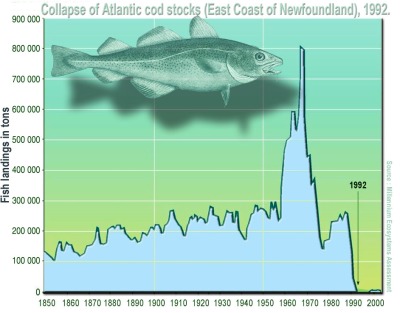 So as I landed in modern-day St. John’s, it was thoughts of how this province has changed over the past few decades that occupied my mind.  I was fascinated with how the island had fared, especially given my grandfather’s close connection to the Grand Banks and the once-abundant cod.

I stepped out of the terminal to a near-perfect Newfoundland day – the sky a brilliant blue and the temperature in the low 70s.  I was ushered into a cab and quickly on my way to the heart of the town.

The streets were busy with people.  Certainly, the cities were alive in Newfoundland.

The architecture here is a mixture of the old and the new, much like streets with which I was familiar.  More-modern gas stations and stores sat shoulder to shoulder with older Victorian structures.  Strings of brightly colored row houses lined more residential streets. 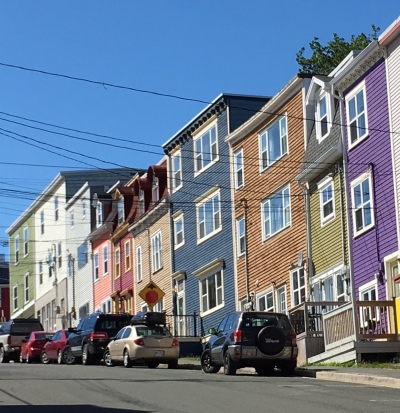 As so often happens, at least with me, I was soon in deep conversation with my friendly cab driver, a 27-year-old by the name of Osmany Morales.  In contrast to the Newfoundlanders who had left the island in the wake of the collapse of the cod industry, Morales family had immigrated to this island from another in the Caribbean — Cuba.

Osmany was 15 when he came to the island in 2004 to escape a difficult life on his home island.  He says it was hard to assimilate, especially with such stark differences in both language and culture.  And then there was the weather, he said, shaking his head.

That’s a difficult age for anyone, I commiserated.  Must have been particularly difficult meeting girls.

He laughed.  “Well it was hard.  I remember the first time I had a girlfriend here, it didn’t last too long.  We couldn’t speak the same language.”

But now, language is no problem and Newfoundland is home to Osmany.  It is a place he’s come to love, especially the people.  They’re overwhelmingly friendly, something I’d heard from everyone off-island, and it’s a place you can feel safe … comfortable. 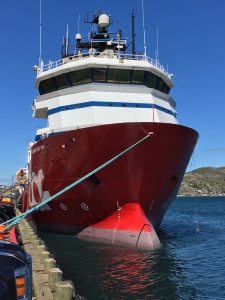 He then turned off the meter and took me on a brief tour of the city, pointing out various spots I needed to see.  George Street, a narrow lane lined with pubs filled with music. Water Street, the main street one up from the harbor, home to small shops and restaurants.  The busy harbor with ships of all sizes.

And people were everywhere, some tourists I’m sure, but others locals.  While the predominant demographic was European-Canadian, there were obviously a mix of ethnicities here.  A later Internet check showed that, indeed, immigration had increased to Newfoundland over the last two decades and many of those new arrivals were, like Osmany, non-European.

Osmany’s father, a fisherman in his native Cuba, had originally come here for the fish.  Although he hadn’t continued as a fisherman, the family had adopted the island — and it them.  Their native-Cuban son was now a taxi drive navigating the streets of St. John’s as if he had been born there.

It was a testament to how fish are still shaping Newfoundland, even in their relative absence.

My garrulous cab driver dropped me off at a red row house where I will be ensconced for the next four days.  Within hours my sister and her husband from North Carolina would arrive to make us a traveling trio.  Osmany helped me with my luggage to the curb.

Enjoy the island, he told me.  It’s small and a very nice place.

I turned the key in the lock.