I don’t really know why anyone stays in campgrounds, my campground host whispered conspiratorially to me.

What do you mean?

Well at campgrounds there are a lot of people, some of them stay up very late at night, she explained.

After my first night camping and being kept awake by chattering children and cackling birds, I knew exactly what she meant. The endless daylight seems to break everyone’s normal sleeping patterns here. And mine had been no exception as I desperately attempted to snug my ears down in my sleeping bag to silence a portion of the sound.

And, all of these private campgrounds cost money, she added.

True as well. Visitors interested in pitching their tents or parking their campers in an Icelandic campground will usually pay some 1600 Icelandic krónur. Although that might sound exorbitant, consider that in American dollars that’s about $12. Still, everything in Iceland is expensive from the transportation to the food to the accommodations to the entrance fees to attractions. Many, like me, find they must carefully count their krónur to make sure they don’t spend too much on a few things and miss out on the rest.

OK, so I understand, but where should these people be staying, I asked.

Anywhere else, she said.

I had read in one of my guidebooks that there is free wild camping everywhere in Iceland, but as an American used to my fellow citizens’ stingy protection of property rights, it seemed hard to believe. It also seemed a bit daring and potentially dangerous. Campgrounds did, after all, provide a veil of safety with others’ presence in neighboring campsites. Yet the books had insisted that the island’s very laws provided that campers could pitch their tents most anywhere, as long as it wasn’t within a town or in front of someone’s home.

You mean you can just park your car along the road, climb a fence if necessary and then pitch your tent?

That’s right, she replied. Icelanders say that fences are only made to keep animals in and not to keep people out.

Her comment lit a bulb in my head and stirred the Viking within me (yes, when my sister Bobbi completed a genetic analysis she found that our family possesses considerable Scandinavian blood). If this small, slight woman who was serving as my campground host was recommending wild camping – and indeed, had done it herself – so could I.

My goal at the end of the day? To find a pasture of Icelandic ponies in which to pitch my tent.

The day was long and without darkness it’s easy to overdo. It chimes 8 p.m. and it’s still light so you continue up the road. Now it’s 9 but not dark yet so on you go. By 10, you’re feeling guilty for not even having found a campsite yet, but there are hours of daylight left before a short two hours of darkness.
I began thinking about bed while stopped at a popular waterfall, Skógafoss, just northwest of Vik. 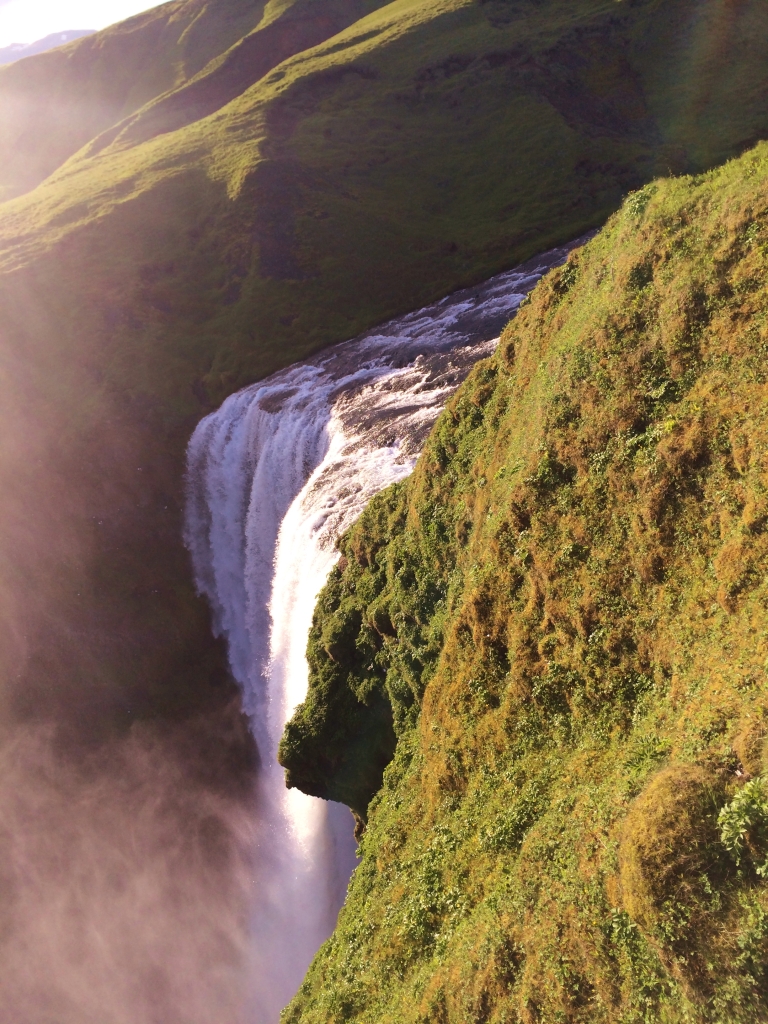 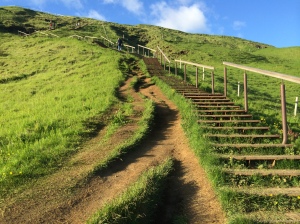 The thundering falls were majestic and an enterprising owner had established a campground at their base. It was so very tempting. And after hiking up what seemed like thousands of steps to a dizzying perch overlooking the top of the 200-foot falls for a view, my legs felt like rubber and I was panting. Yet one look around brought my host’s words back to mind. Although most of the campers here were tenting (seemed like a plus), this was a popular pull-off to view the waterfall. Buses and scores of cars lined the parking lot. I could only imagine the sleep disruption that might be generated as Iceland’s endless light encouraged visitors throughout the night.

I located a potential camping site on my map about 45 minutes down the road and headed in that direction. I turned off the main paved road onto a gravel trail purported to lead to the campground. On and on I went. The gravel eventually became washboard, the washboard become potholes and the gravel grew larger and larger. After several kilometers I admitted defeat and turned around.

It was a pasture full of Iceland ponies.

I immediately pulled off the road and extracted my camping supplies from the trunk. The pasture was nestled in a green, green valley between towering mountains. Nothing – nothing was in sight except mountains, the valley, a branching river and, of course, the ponies.

When I clambered into my sleeping bag that night I could hear only the sound of the wind and the occasional bleat of a sheep. Perhaps a dozen cars rumbled by on the gravel road during the night but otherwise it was utter solitude.

How lovely it was to experience solitude. We’re surrounded by people daily, hustling and bustling about; cars whirring down the busy streets; a multitude of noise and smells and sensory assaults. This small valley provided me the gift of aloneness. And, it wasn’t loneliness. It was instead intense pleasure to feel an intimate part of the natural world. 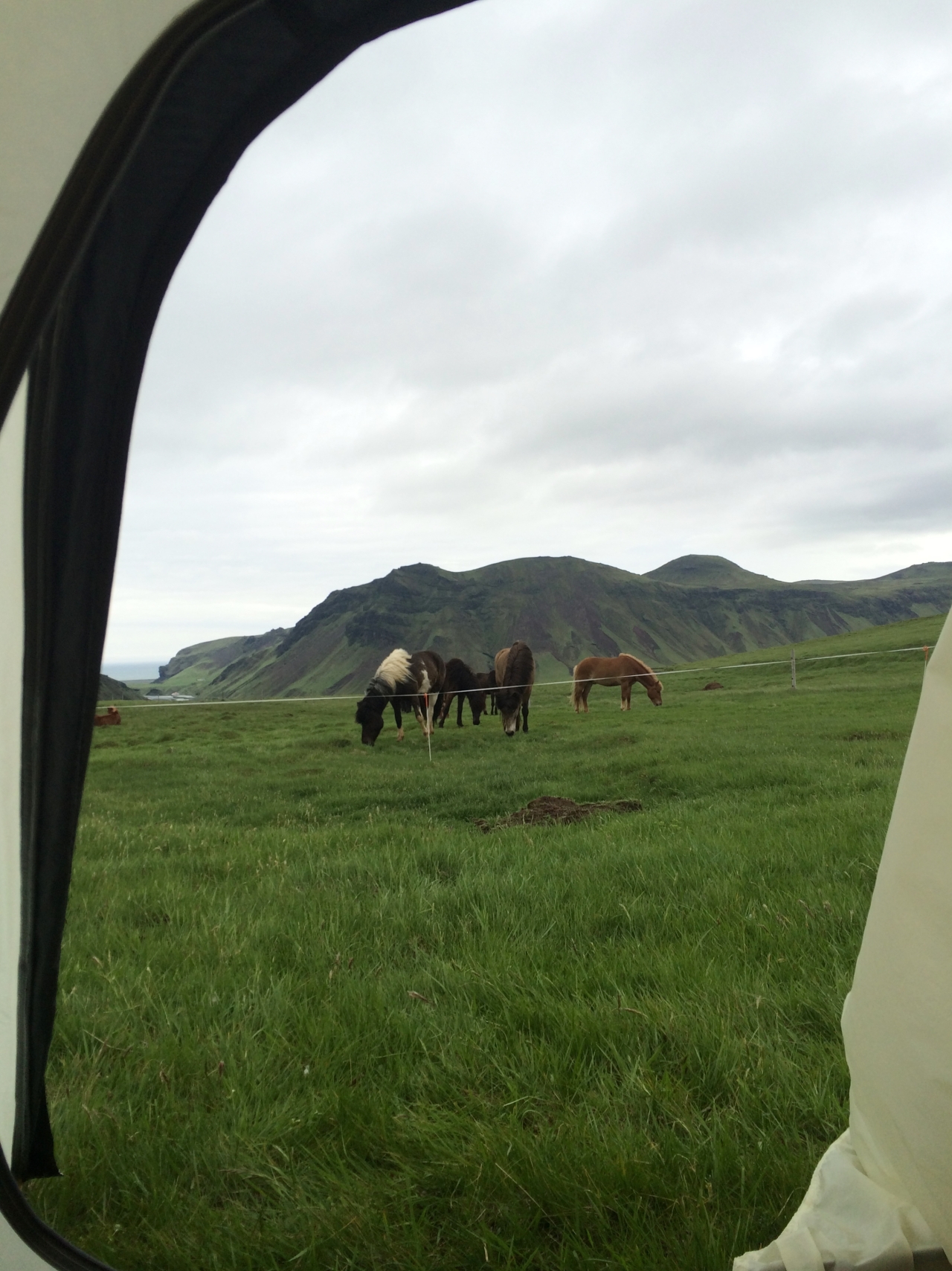