Down into the Kenai

By Paula HorvathAugust 2, 2013
“To the lover of wilderness, Alaska is one of the most wonderful countries in the world.” … John Muir
Traveled today down the Kenai (pronounced “key – nigh”) Peninsula toward Seward.  The scenery is quite simply gorgeous; towering mountains jutting into spectacular skies.  It was difficult to make much progress as the vistas compelled me to stop every 15 minutes or so to take another picture.

I had always thought of Alaska as harsh, cold, rocky, stark – and perhaps it is in the winter – but the summer reveals such an extraordinary palette of colors, especially greens.  Emeralds, silvery sages, apple greens, chartreuses and, of course, evergreens. 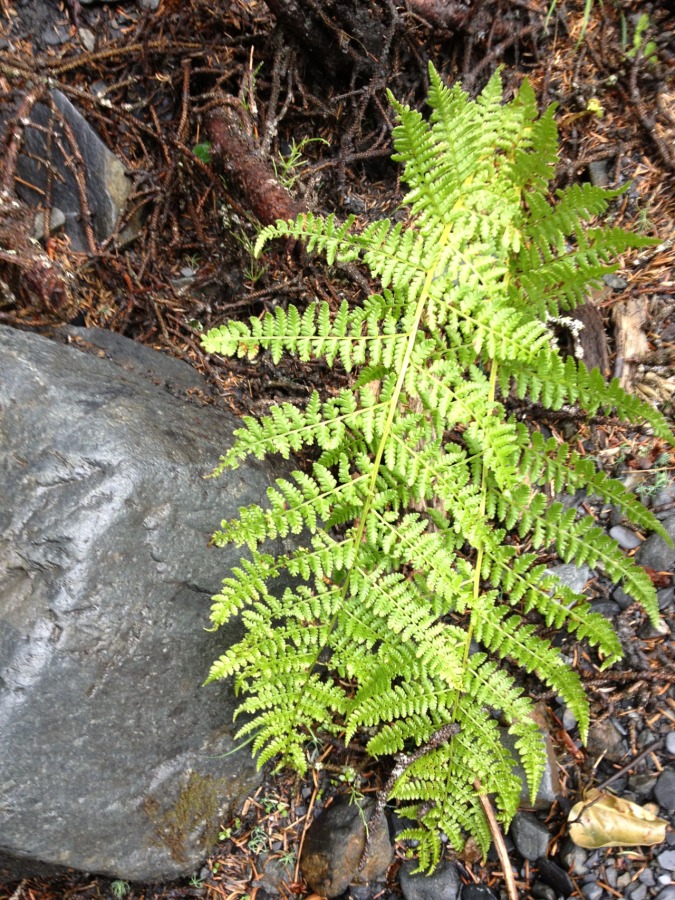 Along the Seward Highway I stumbled upon a small sign by the road that read “Wood Carving.”  Naturally curious, I turned into the drive.  There I discovered a true artist, Jordan Anderson, who chain saws some pretty remarkable pieces (and has a cool husky named Mikko).  If you want to see more, go to jordancarving.com (I swear he didn’t pay me to say this!) 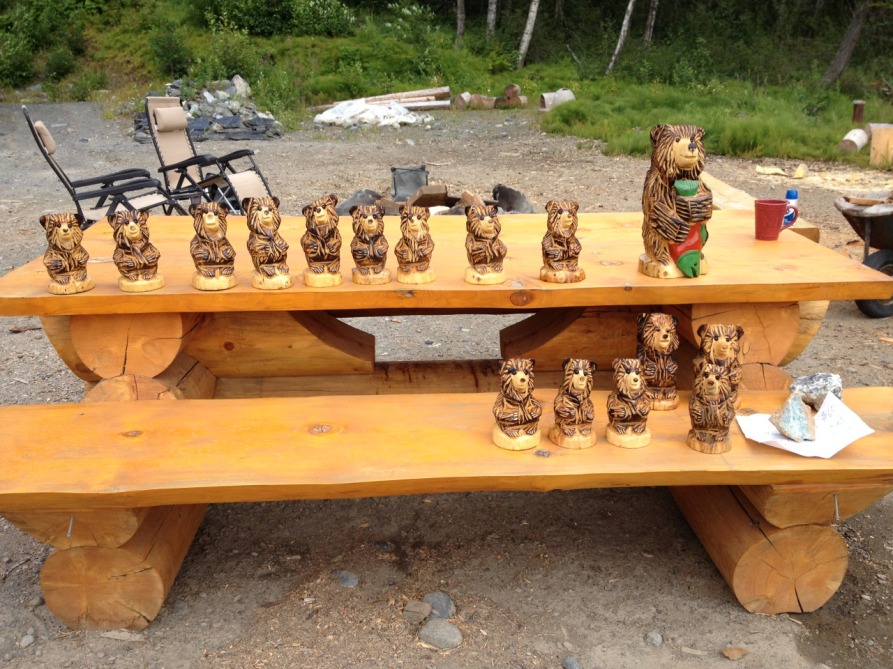 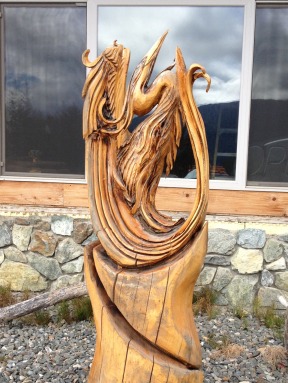 Whenever you cross a tumbling river, there are salmon fishermen.  Men, women and children all wade into the waters in hip-high boots to try their hand at hooking these tasty treats. 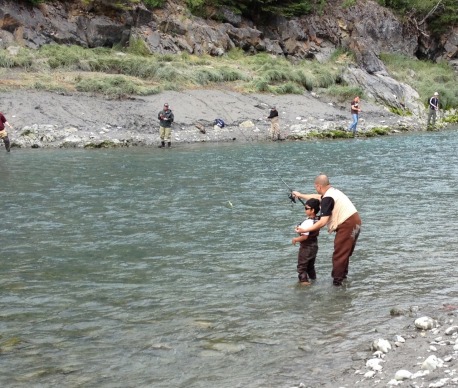 A bit further down the road is the Alaska Wildlife Conservation Center.  It’s a nonprofit organization dedicated to preserving the state’s wildlife and has everything from musk oxen to reindeer.  One of its more important missions is the conservation of wood bison.  The center has a small herd you can visit – something the bison love because the visitors are provided with strawberries to feed them. 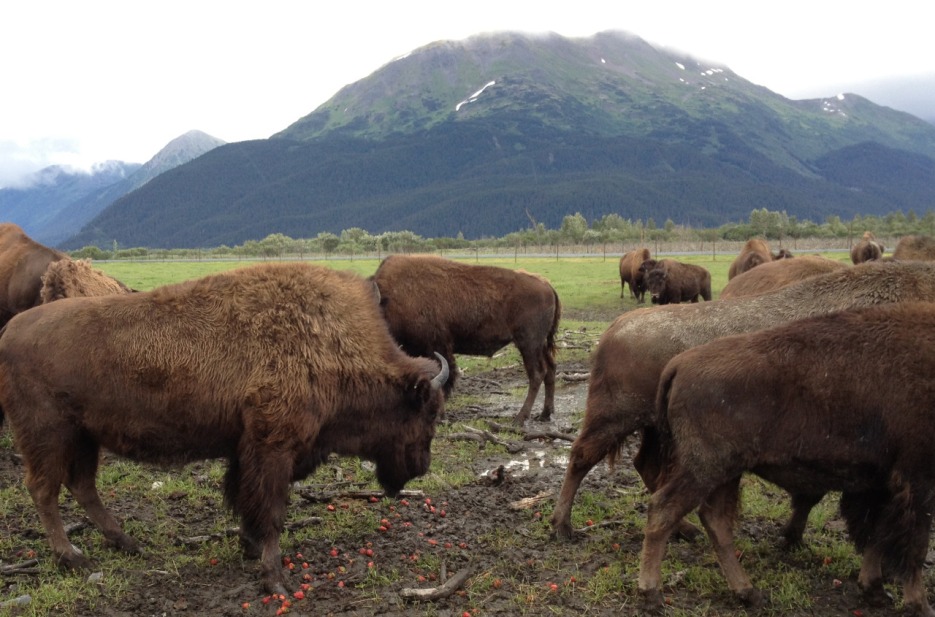 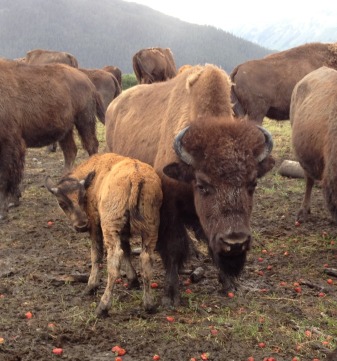 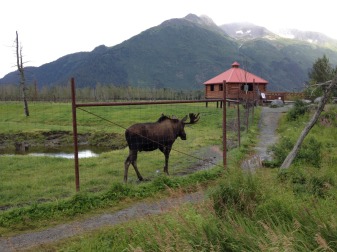 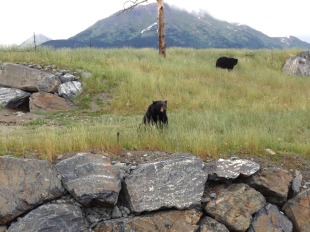 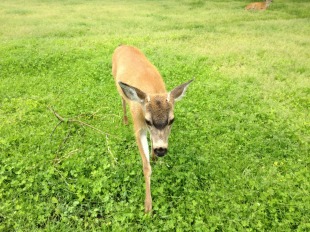 The towering mountains along the Seward Highway are dotted with glaciers, which are easy to spot because of the sparkling turquoise color of the frozen glacial waters.  Just a few miles north of the town of Seward is Exit Glacier, part of the Harding Icefield located with Kenai Fjords National Park.  The icefield (one of many in Alaska) is 700 square miles and contains some 40 glaciers.  You can park near the foot of the Exit Glacier and take a three-mile round-trip hike to this spectacular overview. 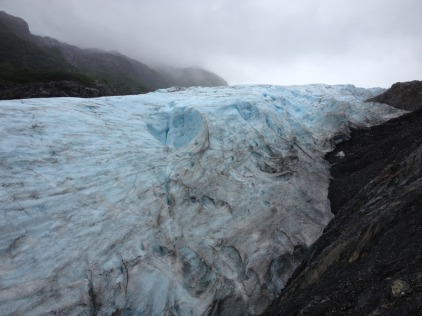 It makes me sad to realize that these stunning natural wonders may not be here forever.  While this isn’t a very good picture, you can get an idea of how much the glacier has retreated in the last 200 years.  Last year, it retreated another 150 feet, a record for Exit Glacier.

Just outside Kenai Fjords National Park is a monument to sled dogs in the form of the Seavey Iditarod center.  The Seaveys are a family of mushers who have won the famous sled dog race numerous times, the latest when Mitch Seavey won this year.  In fact, it was the elder Seavey who helped start the official Iditarod in the late 1960s to celebrate both the services provided by sled dogs to Alaskans and the famous 1925 lifesaving trek by a team to bring diphtheria vaccine to Nome (remember Balto?).

These dogs are amazing athletes and seem to love the idea of pulling sleds.  The moment the first musher appeared with a harness the dogs set up a tremendous din of barks and howls and snorts.  They jumped into the air and turned somersaults. When a musher approached one with a harness, the dog would practically jump into the musher’s arms in joy.  Phenomenally, once the two “sleds” pulled out of the yard with the dog teams, the remaining dogs immediately hushed and lay down, realizing their time might come with another tour. 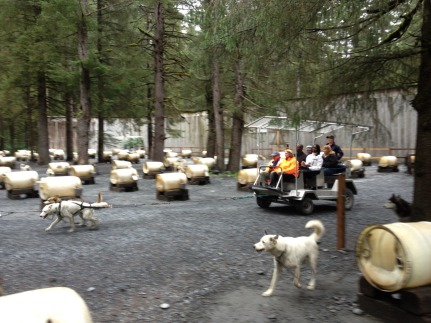 Joanna and Justin are two of the guides at the Seavey

center.  Justin is a musher himself and has a kennel of over 50 dogs.  He has run the Iditarod twice, but not won yet.  He says the race (one of many across the state) covers some 1,000 miles of trail.  The first year the race was run, it took mushers 33 days to finish; today the average finish time is 10 days.  The participants can get no help from outsiders (except the dogs are seen by vets at every stop) along the way so must send about 2,000 pounds of supplies ahead of them along the trail.  It is so rigorous and so demanding on the mushers themselves that there are many accounts of people falling asleep on their sleds or hallucinating from lack of sleep. Joanna, who is 19, has already been a musher and racer for years.  She hopes to tackle the Iditarod herself in four or five years.

My first night “camping” in Alaska was definitely a mixed bag.  I had decided to forgo a tent (perhaps a bad idea in retrospect) in favor of sleeping in my car.  The back seat folds down and I surmised I could simply stretch out my sleeping bag, placed on an inflatable mattress pad rented from REI, and spend the night.  Purchased black sheets from Walmart and draped them all around the inside of the car to keep out the light, which continues until around midnight.  Once I’d snuggled down in my sleeping bag I realized the fold-down back seat created a six-inch hump beneath my mid section; my choice was to either slide down and sleep almost totally within the trunk or contort my body in a way to minimize the damage.  Worse yet, the mattress pad the 20-some-year-old REI clerk told me was “really comfortable once inflated” was much less than my nearly 60-year-old body needed.  I think I’ll have a talk with him when I return to Anchorage (watch this blog to hear his response).  I did, however, make it safely through the night and awoke to a rainy morning.  Onward!!!! 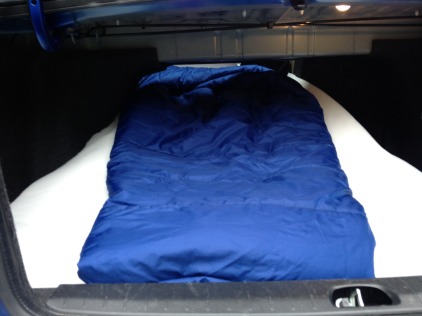 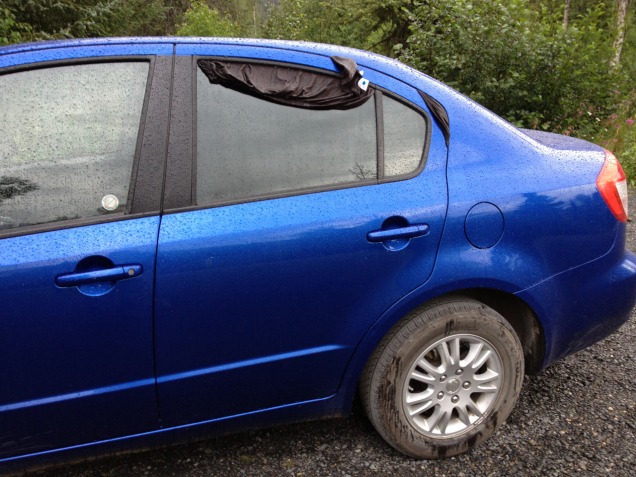